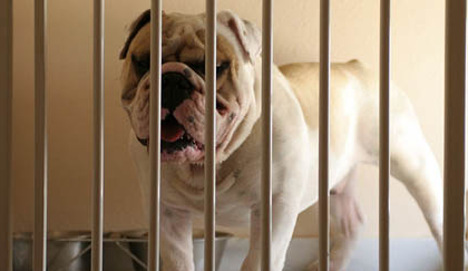 Fernando Javier Ramos from Spain last saw his pet British bulldog Nano alive when he was due to board an Air Berlin flight in Seville on a hot summer's day in July.

Airline staff refused to put a bowl of water in Nano's cage while the animal waited to be loaded along with the rest of the cargo, Ramos claims.

He said he insisted that Air Berlin staff should keep an eye on his pet's health as it waited for over an hour in a glass box in the sweltering Andalusian heat.

But Air Berlin personnel allegedly told him they were not allowed by law to give water to animals before and during flights.

The pet owner watched on helplessly from the boarding gate as Nano struggled without air, water or shade in his glass box.

When the flight landed in Majorca an hour later, Ramos waited in vain for over fifteen minutes by the conveyor belt. Nano was nowhere to be seen.

Air Berlin staff waited for all the passengers to leave before taking Ramos to a quieter part of the airport.

They then told him it was likely his pet dog would require veterinary assistance.

“Finally, after he insisted they bring him his pet as soon as possible in order to save its life, they handed over the dead animal,” consumer rights group Reclamador.es told Spanish newspaper La Voz de Galicia.

“Air Berlin only provided Ramos with a discount voucher for his next booking with the airline,” Reclamador added.

“The German low-cost company didn't even pay for the animal’s incineration.”

They did, however, offer Ramos a €100 flight voucher.

Ramos is now suing Air Berlin for €2,635 in damages in a trial due to take place in a Majorca court on Tuesday.

“They treated Nano like an object, a suitcase, instead of a living being.”

“Air Berlin certainly regrets what happened, ” the carrier told The Local but said they could not comment further as proceeding were still continuing.