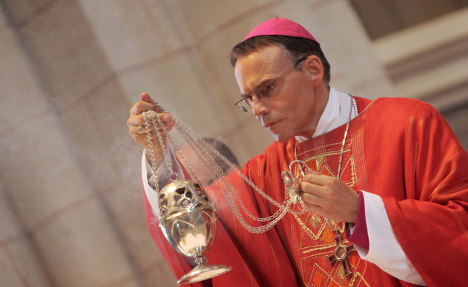 The bishop of Limburg, Franz-Peter Tebartz-van Elst, has been heavily criticized for the luxurious complex being built next to Limburg Cathedral in the state of Hesse. Earlier this week it emerged the costs had overrun by ten times the initial estimate from around €3 million to €31 million.

His own apartment in the complex is costing €3 million with €478,000 going on furnishings. Guest rooms will cost €1.1 million and the new chapel €2.67 million.

Although the money is coming from church funds, the bishop has been criticized for setting a poor example.

The 53-year-old has defended himself. He told the Bild on Wednesday: “Those who know me, know that I don't need any kind of grandiose lifestyle.”

But the bishop’s own financial council has criticized him for apparently keeping them in the dark as the project’s costs mounted.

Jochen Riebel, the spokesperson for the diocesan finance council, told newspaper the Frankfurter Allgemeine Zeitung the bishop was “either a sophisticated deceiver or that he's just plain sick.”

A commission is being set up by the Catholic Church in Germany to investigate the spending.

The bishop’s expensive tastes have landed him in the headlines before. He was criticized last year after magazine Der Spiegel revealed he flew first class to India to visit poor children.

And on Thursday prosecutors claimed the bishop made false statements in affidavits submitted in two civil claims against Der Spiegel after the article appeared. They have now called for a punishment which could include fines.

READ MORE: Juliet's breast disfigured 'from too much touching'