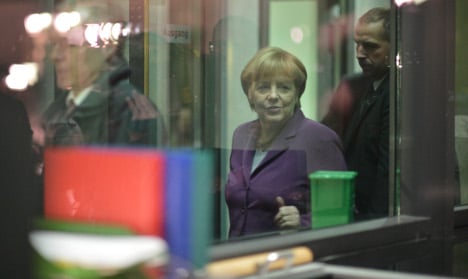 The latest poll showed a record two-thirds of Germans would favour a re-run of a left-right “grand coalition” between the two big parties, Merkel’s conservatives and the centre-left Social Democrats (SPD).

For now Merkel, whose centre-right CDU won the September 22nd vote, is keeping her options open and has agreed to more talks early next week with both the SPD and the left-leaning and ecologist Greens.

In the end “the typically cautious Merkel will probably still prefer the tested combination with the SPD”, with whom she governed in her first term, said an analysis by Berenberg Bank. “We see an 80-percent probability for a grand coalition in Germany.”

On Friday – a day after the conservatives held their first exploratory talks with the Greens, described as cordial by both sides despite many points of conflict – Merkel and CSU chief Horst Seehofer met quietly with SPD chief Sigmar Gabriel in the chancellery.

Merkel has already engaged in talks with the centre-left SPD, but on Thursday the conservatives made clear they are keeping their options open with the Greens.

Emerging from three hours of closed-door talks in Berlin, all three parties praised the constructive spirit of the talks and said they would meet again next Tuesday at 3pm, a day after the second round of SPD talks with Merkel’s delegation.

CDU general secretary Hermann Gröhe said the negotiating partners had found they shared “common goals” in areas such as eurozone policy, Germany’s shift from nuclear to renewable power and social integration. But he also noted “considerable differences” in how to achieve them.

He said all three parties therefore found “it makes sense and is necessary” to keep talking.

The Bavarian CSU’s Alexander Dobrindt, one of the biggest critics of the left-leaning Greens, noted that “the distance between the Greens and us is a little bigger than between the SPD and us”, but said this made a second round all the more important.

The Greens’ Cem Ozdemir spoke of a “positive atmosphere, a friendly mood…with the necessary seriousness” in the talks on how to govern Europe’s biggest economy.

‘We are not getting through’

But he also said that the Greens had found that on some issues “we are not getting through”, and that combating climate change and other topics had not yet been touched on.

Merkel in her first two terms already ruled with two coalition partners – the SPD and then the pro-business Free Democrats (FDP) who crashed out of parliament in the last election.

Some observers say that the famously pragmatic Merkel may be tempted to woo a third partner, the Greens, in her third term, although the alternative view says she would prefer a far more stable “grand coalition” with the SPD.

An Emnid institute poll this week found 46-percent support for a “grand coalition” and 22-percent backing for a conservatives-Greens tie-up.

However, asked which scenario was more likely, 79 percent named a “grand coalition” and only nine percent an alliance with the Greens.

Either way, the CDU had signalled it is serious about talking to the Greens, not just playing them against the bigger SPD to gain leverage.

The Greens, meanwhile, have been badly torn about a power pact with Merkel, which the party’s “fundamentalist” wing regards as the ultimate betrayal of Green ideals.

But what started as a protest party has become increasingly mainstream as German society has turned greener. The Greens have already had a stint in government, with the SPD from 1998 to 2005, during which the once avowedly pacifist party signed off on Germany’s military deployment to Afghanistan.

Merkel in 2011 adopted the Greens’ core demand of a nuclear phase-out, reacting to the public mood after Japan’s Fukushima disaster.

Environment Minister Peter Altmaier told this week’s news magazine Der Spiegel that “the chances of a coalition with the Greens have risen in recent days from ‘theoretical’ to ‘conceivable'”.