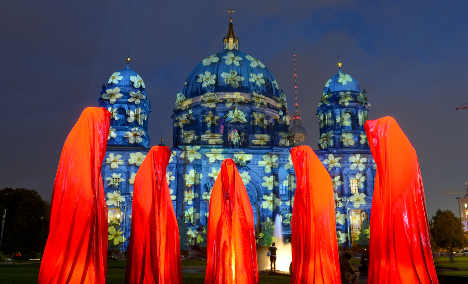 The show runs for 10 days between the 9th and 20th of October and sees iconic landmarks such as the Brandenburg Gate, the television tower in Alexanderplatz and the Olympic Stadium being lit up.

CLICK HERE for the best pictures from this year’s festival

The festival, now in its ninth year, has become a major attraction for tourists.

The ten days have seen around 520,000 overnight bookings, and attracts more than 1.5 million guests each year.

It features arts and culture events such as “OpenCity” on Saturday 12th October, when cathedrals, museums and TV studios open their doors to the public.

Check out our photos here