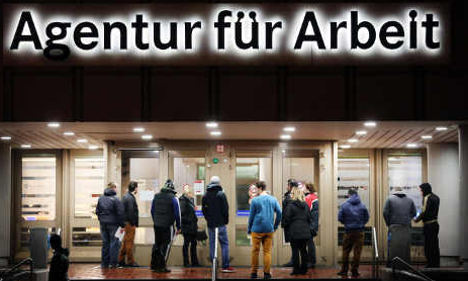 Although Eastern Europeans are often the target of politicians wishing to cut benefits to foreigners, The Local has found thousands of Americans and Brits also reliant on German benefits.

But unemployment claimants in Germany spoke of the difficulty of getting benefits as a result of the bureaucracy. One described the process of claiming unemployment benefits as “almost a job in itself”.

Figures released to The Local by the Federal Employment Agency show that in June 2013 there were 4,648 Brits and 3,664 Americans claiming unemployment benefit known as Hartz IV.

While this accounts for less than one percent of the total number receiving the benefit, the percentage of British and American expats who claim while being fit for work is higher than the national average.

Of the British claimants, 87 percent were fit for employment whereas 83 percent of Americans claimants who get benefits were able to work. The national figure is 73 percent.

“The number of British and American claimants has fluctuated since 2007,” said Ingo Wermes from the Federal Employment Agency’s statistics department.

But in the last year the number of Brits and Americans claiming benefits in Germany has risen slightly, increasing by one percent for Brits and by 2.6 percent for Americans.

“The freedom of movement does not mean the right to scrounge benefits”, Friedrich told the Welt newspaper on Tuesday.

But the process of claiming benefits in Germany is not as easy it would appear.

‘They told me to go back to my own country’

“Applying for Hartz IV was almost a job in itself”, said one 27-year-old from Ireland who lived on unemployment benefit in Berlin for six months and now works in London.

“Every day involved going to some office, filling out a load of paperwork, taking this to another office, repeat,” he said.

The man, who did not wish to be named, told The Local of incompetence and, in one instance, xenophobia from job centre employees.

“None of the employees seemed to know definitively what the rules were,” he said. “There was a lot of hostility, with one member of staff telling me to go back to my own country and that I wasn’t entitled to anything.”

“It was infinitely easier getting benefits in the UK, all done in one afternoon, however the amount is nowhere close to what a human would need to live on,” he added.

In the UK claimants receive less money. Jobseekers’ allowance starts at €67 a week, which adds up to less than €290 a month.

In the US, meanwhile, unemployment benefits usually take the form of state and federal payroll taxes paid by employers to workers who lose their job. The amount of compensation paid to employees varies from €311 to €31 a month.

Hartz IV in Germany is means-tested and the amount received depends on marital status, personal wealth and housing situation, but a monthly base-rate payment of €374 is available to single people and single parents.

One, a 23-year-old British graduate, who wishes to remain anonymous, arrived in Munich in July this year with high hopes. He had a first-class German degree under his belt and a job lined up as a trainee in the sales department of a sports equipment retailer.

But he said it soon it became clear that the job was not all it was cracked up to be. It offered little training and was poorly paid – so he left.

“Even in Germany, which is considered an economic powerhouse, there are still instances of exploitation in companies and it can be very difficult to find work”, he told The Local.

“I didn’t come to Germany for benefits”, stressed the claimant. “I came here for a job but it turned out to be exploitative.”

Another Brit, a 28-year-old computer programmer living in Berlin, had a similar experience when he was unexpectedly fired from a traineeship that turned out to offer “no training at all”.

He claimed Hartz IV for about four months before finding a new job and received around €560 a month.

He said: “The annoying part was trekking across different neighbourhoods to get hold of various bits of paperwork from various offices. There appears to be no centralized system where one can obtain these documents from.

“Jobless and frustrated, I began looking for work straight away and only found jobs that wanted to pay programmers between €200-€400 a month from Berlin start-ups whose products I was not convinced by.”

A spokesman for the British Embassy said: “We support freedom of movement but we are also concerned about benefit tourism in the UK. We can’t comment on the German situation but clearly benefit tourism is an issue and we are doing something about it.”

The US Embassy said it had programmes to help its citizens if they got into financial trouble abroad.