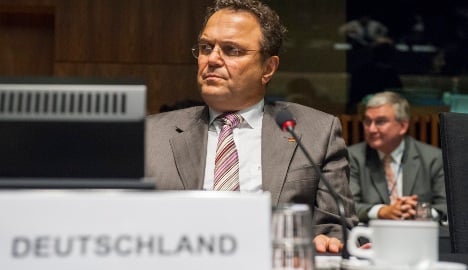 Too many “poverty migrants” are coming to Germany from Romania and Bulgaria, said Hans-Peter Friedrich, calling for the EU to clamp down on them.

Citizens of both nations, which joined the European Union in 2007, will from 2014 be granted full freedom of movement within the EU.

“It cannot be that freedom of movement is so badly abused that people switch countries because they want higher social welfare payments,” said Friedrich on Tuesday at the beginning of a meeting with his EU counterparts in Luxembourg.

Although lots of people came to Germany to “work hard,” he said, “there are also unfortunately those who come because they want social welfare.”

The minister’s comments found a muted reception at the EU, however, with many implying they thought Friedrich’s fears were unfounded. EU Interior Commissioner Cecilia Malmström spoke of partially “over-exaggerated” concerns.

The EU commission was also due to release a report on Tuesday on poverty immigration in Europe, in which it found that the increase in Romanian and Bulgarian immigrants was not a significant burden on the German economy.

There was no danger for Germany, said EU Social Commissioner Laszlo Andor recently in an interview, only advantages for both sides. The newcomers were able to find work and contribute to the German economy.

Green German politician Volker Beck dismissed Friedrich’s comments “unbearable tittle-tattle” and accused the interior minister of having learned nothing from the Lampedusa tragedy.