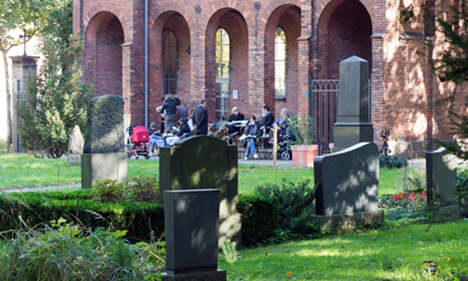 Just metres away, a funeral procession is making its way through a large 19th century graveyard in Berlin’s hip Kreuzberg district, but cafe customers Sebastian Klopfleisch and Gritt Brosowski are refusing to let it get them down.

“I think it’s a charming idea to put a cafe here. It’s got something alive about it,” said Klopfleisch, 34, who often strolls through the graveyard.

Two pensioners who have taken seats in the corner of the small cafe in the protected redbrick building, agree:

“A cafe makes the graveyard more attractive,” says the 73-year-old female customer. “It’s a place where you can talk about people who’ve died, and people buried here,” adds her 64-year-old companion.

“Most of our customers are visitors to the graveyard or local residents,” said cafe owner Martin Strauss, 48, who had the dream of turning what is traditionally a sombre place into a lively meeting spot.

The German graveyard caretakers association believes the idea, which at the moment is still rare, could soon take off, with hundreds of potential graveyard cafe spots in the capital.

“In a couple of years graveyard cafes won’t be the exception anymore,” said Jürgen Quandt, retired pastor and head of Berlin’s Protestant Graveyard Association, adding that more such cafes are being planned across the city. “The main idea is to make a public place more accessible,” he added.

Cafe Strauss in Kreuzberg is a hit. Regular funerals take place alongside concerts and readings, with little considered taboo. Recently one author read excerpts from a murder mystery thriller, said Strauss, adding that the church had not given any restrictions on what kind of events could be held there.

“But of course [the church] knows we won’t be holding any Metallica concerts here,” he added.