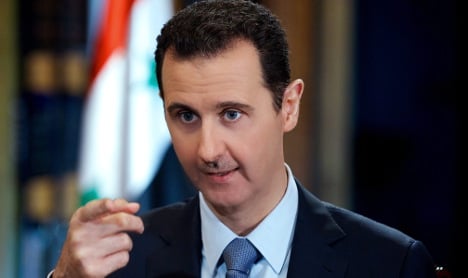 “Whenever political decisions are made, mistakes happen. Everywhere in the world. We are all just people,” Assad said when asked in an interview with the Spiegel published on Sunday whether it was a mistake to respond with force to initially peaceful protests.

“Personal mistakes by individuals happened. We all make mistakes. Even a president makes mistakes. But even if mistakes were made in the execution, our fundamental decisions were right,” he said.

After the regime launched a brutal crackdown on the protesters the conflict rapidly escalated into a full-scale civil war in which 115,000 people have been killed and millions forced to flee their homes.

Asked if the armed opposition has sole responsibility for massacres, and if his forces were entirely innocent, Assad replied: “You can’t just absolutely say they carry 100 percent of the blame and we carry zero.”

“Reality is not black and white, there also shades of grey. But basically it’s correct that we are defending ourselves,” he said. “And I can’t worry about the mistakes of individuals, given that there are 23 million Syrians. Every country has to fight criminals. They can be anywhere, (including) in the government, in the army.”

Assad also denied using chemical weapons against his own people and told Spiegel that his government was cooperating fully with international disarmament experts and UN inspectors.

“We’re very transparent. The experts can go to every site. They are going to have all the data from our government.”

He also dismissed assertions by US President Barack Obama that Syrian forces carried out a chemical attack that killed hundreds in the Damascus suburbs in August.

“We have not used chemical weapons. This is wrong,” Assad told Spiegel.

UN inspectors who investigated the August 21 attack said in a report that sarin gas was used, but it was not within their mandate to say who was responsible.

A new team of international disarmament experts have started to destroy Syria’s chemical weapons in line with a UN Security Council resolution aimed at averting punitive US military strikes.

Assad also suggested Germany could play a mediator role in ending the war.