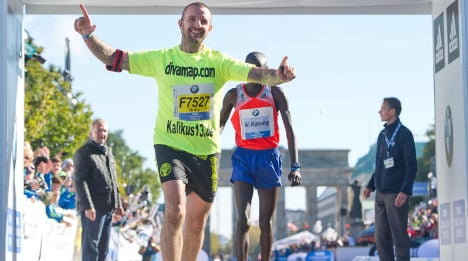 Students in Braunschweig broke a world record of the weekend when they constructed a paper plane with a wingspan of 18 metres and got it to fly.

The following day in Berlin another, more prestigious record was broken – the marathon world record. Wilson Kipsang ran a time of 2 hours 3 minutes and 23 seconds – but bizarrely the Kenyan did not break the winner’s tape. That honour was taken by an intruder wearing an escort agency T-shirt.

In football, it was a good week for Germany’s Champions League sides with Dortmund, Bayern and Schalke all winning.

But football was not the only talking point in Schalke’s match against Basel. The match in Switzerland was interrupted by Greenpeace activists who abseiled from the roof of the stadium in a protest against Schalke shirt sponsor Gazprom.

See our photos of the week here