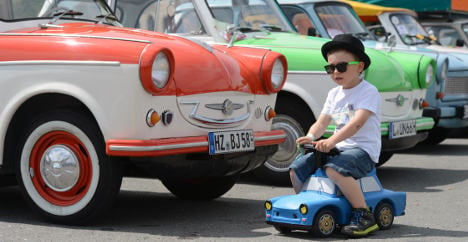 Despite dwindling numbers and a reputation for being one of the worst cars in the world, the Trabant, affectionately known as the Trabi, has become one of the most widely-recognized and well-loved symbols of the former Communist East Germany (GDR).

The vehicle has a well-deserved reputation for unreliability, inefficiency, terrible performance. They are also not known for their quality, being made of duroplast, a fibreglass-like material similar to Bakelite. This means they have a carbon footprint that would make Al Gore faint.

High though this number is, considering production ended in 1991, the 26-horsepower vehicle used to be a more common sight in Germany.

Most Trabi lovers can be found in the GDR. In the state of Saxony alone, there are more than 8,600 of the vehicles and their manufacturer, Sachsenring, built the cars in Zwickau, Saxony. The town is still home to an active Trabi club, one of over 30 groups of Trabant fans across the state.

Thomas Winkelmann, chairman of the Zwickau Trabant club, told The Local they had no one reason when it came to what was most special about the vehicle.

Their members had all sorts of Trabis, from original cars to highly modified versions, he said. “I couldn’t say when I got interested in Trabis…I grew up with them,” Winkelmann said.

Winkelmann put Saxony’s particular liking for the car down to the fact it was the most populous of the former East German states.

But the Trabi’s growing fame as a symbol of the former GDR and of modern German history has not only come from motor clubs. The old communist workhorse has a new master – the lucrative tourism industry.

Capitalizing on the enthusiasm among young Germans and visitors from abroad for all things GDR, Michael Nitsche saw the opportunity to put the Trabant to work doing tours of the capital, and thus was born the “Trabi-safari”.

“It all started with a little idea I had at university, to rent out Trabis,” he told The Local. But the demand kept growing, and eventually the company started running tours of Berlin.

The Trabi’s popularity can be put down to its historical role and the concepts people associate with it, both positive and negative, said Nitsche. “The Trabi was the perception of the East”, he said. “Lots of people’s memories are tied up with this car.”

But the interest in the Trabi is different for East and West Germans, he said. “Easterners connect lots of memories with the Trabi – first love, first holiday, camping trips… They want to share it with their kids. For Westerners, it is more about experiencing something different. “Mostly they’re just curious and want to try it out,” he said.

“Young people no longer have a connection with the Trabi,” Nitsche added, but his safari could be a way for people to connect to the history, of which the car is a part. “Many associate the Trabi with the East and the fall of the wall… and driving a Trabant past the Wall is totally unique,” he said.

Even as numbers of the communist regime’s old motor gradually decline, they seem to become better and better-known, both among young Germans who never saw the GDR or the fall of the Wall and from overseas.

Whether you put it down to Ostalgie – nostalgia for elements of GDR society – or the chic surrounding East German culture and artifacts, the Trabant’s return to the limelight is undeniable. How long it will be until the last one breaks down for good, remains unclear.