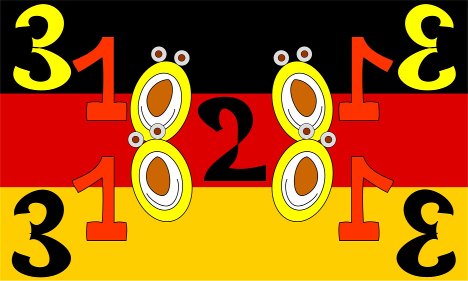 Most people in Germany enjoyed a day off work on Thursday as the country celebrated a national holiday to commemorate the re-unification of East and West Germany in 1990.

This year’s German Unity Day is a bit special, in that the date 3-10-2013 is a palindrome. According to one American professor, this will not occur again until October 3rd, 3013.

This year is the first time in 23 years that the date of Germany’s national holiday has had this quality, according to palindrome enthusiast Aziz Inan, professor of Electrical Engineering at the University of Portland. The date is also the only palindrome date in 2013.

Every year Germans commemorate the anniversary of the day in 1990 when East Germany formally acceded to the West, creating a united country after four decades of division.

Back then, officials decided on this date for national celebrations, rejecting the alternative date of the anniversary of the fall of the Berlin Wall on November 9th 1989.

November 9th was deemed inappropriate as it coincides with the anniversary of Kristallnacht, a large-scale anti-Jewish pogrom by the Nazis in 1938, Adolf Hitler’s failed attempt to take power in 1923 and the declaration of the Weimar Republic in 1919.

Chancellor Angela Merkel and President Joachim Gauck will lead this year’s official celebrations in the south-western city of Stuttgart, with further events planned around the country, including at Berlin’s Brandenburg Gate.