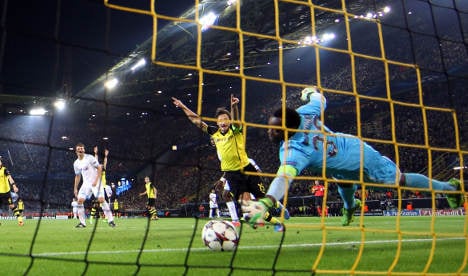 Last season’s beaten finalists Dortmund got their Champions League campaign back on track with a convincing 3-0 home win over Olympique Marseille.

Having thrashed Freiburg 5-0 at home on Saturday, Dortmund picked up where they left off in the Bundesliga with Poland striker Robert Lewandowski and Germany winger Marco Reus again claiming the goals.

Dortmund lost home and away to Marseille in their botched Champions League campaign two years ago, but gained some revenge at the Westfalenstadion to go second in Group F behind leaders Arsenal.

Dortmund had coach Jurgen Klopp confined to the stands after receiving a UEFA ban for verbally abusing the referee during their 2-1 defeat at Napoli a fortnight ago.

“I told the boys they shouldn’t get used to wins like that,” said Klopp, who was only allowed to contact the team 15 minutes after the final whistle. “It was a great game, Marseille are a strong team and you have to give it everything you have against them.

“My team were prepared to stick their foot in the door and make sure of the win,” he added. The stats showed the Dortmund team ran six kilometres more than their French rivals.

Goalkeeper Roman Weidenfeller, who was sent off in the first-half in Naples, was also suspended allowing Australian Mitchell Langerak to start his

Compared to their 2011 defeat at home to Marseille, this was a different performance from Dortmund, who had raced in to a 2-0 lead, only to lose 3-2, conceding the winner three minutes from time, two years ago.

Both teams had early chances, noticeably from Reus, whose swerving shot forced goalkeeper and captain Steve Mandanda into a diving save on six minutes.

The hosts took the lead with 19 minutes gone from a fast counter-attack with Marseille pushing forward from a free-kick.

Dortmund’s new signing Henrikh Mkhitaryan put Reus into space and with the guests’ defence in disarray, Germany Under-21 left-back Erik Durm, in for the injured Marcel Schmelzer, squared for Lewandowski.

The Poland star, who became the first footballer to score four goals in a Champions League semi-final against Real Madrid last April, tapped home for the first of his two goals.

Reus claimed his goal on 52 minutes when he curled in a towering free-kick which Mandanda parried, but the ball bobbled over the line and was smashed home by Pierre-Emerick Aubameyang for good measure.

Lewandowski claimed his second and his 13th goal on his 21st Champions League appearance when he drilled home a penalty after centre-back Nicolas N’Koulou hauled down Reus in the area 11 minutes from time.

Benjamin Mendy’s hand in the area.

There promises to be a fascinating confrontation at Emirates Stadium on October 22 when Dortmund travel to face Arsene Wenger’s Arsenal.

A wonder strike from Julian Draxler gave Schalke a 1-0 win at Basel.

The 20-year-old scored from 25 yards on 54 minutes after Basel failed to clear a corner properly.

And the Germans could have gone taken the lead earlier when Roman Neustäedter hit the crossbar with a 30-yard effort.