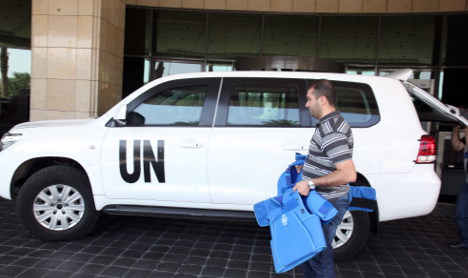 Data released by the economy ministry showed that between 1998 and 2011 German firms exported a total of 360 tonnes of chemicals for either military or civilian use to Syria.

The ministry insisted that it had no evidence the chemicals, which were approved as recently as April 2011, were used in weapons.

“After a comprehensive review of all available information, it can be assumed that the goods were used for civilian purposes by private industry,” it said in a statement.

The ministry did not say which companies had exported the chemicals but said that shipments stopped from May 2011 when sanctions against chemical exports to Syria were imposed.

It had acknowledged two weeks ago that export licences were granted between 2002 and 2006 for shipments totalling more than 100 tonnes of so-called dual-use chemicals.

Ministry sources said the chemicals could be used in the surface treatment of metals, fluorination of drinking water and the manufacture of toothpaste.

UN chemical weapons inspectors reported in September that banned chemical weapons were used on a large scale in the Syrian civil war, and that evidence showed sarin gas killed hundreds in an opposition-held area near Damascus on August 21st.

The Syrian opposition and its allies have blamed President Bashar al-Assad’s troops for the attack. The United States claims more than 1,400 people died and has threatened to attack Assad’s regime.

German Foreign Minister Guido Westerwelle said on Saturday at the UN General Assembly that Berlin was ready to give financial and technical support to the international operation to destroy Syria’s chemical weapons.

The announcement followed a resolution passed by the UN Security Council

which ordered the destruction of Assad’s banned chemical arms.