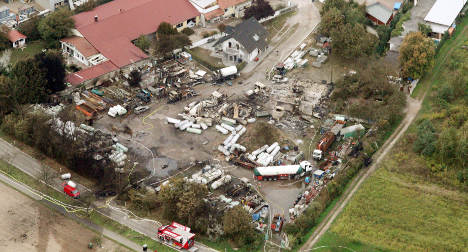 The blast, which happened at 5am on Saturday, left 16 firefighters injured in the town of Harthausen in Rhineland-Palatinate, western Germany.

On Sunday, 13 of them were still in hospital being treated for burns and breathing problems. Three were in intensive care but their condition is not thought to be life threatening.

The explosion was so large that it sent two gas tanks flying several hundred metres into the air. One landed in a field and the other near a home.

Threatened with further explosions, 3,000 people were rescued from the area on Saturday by 450 emergency services workers. They were allowed to return to their homes on Sunday morning.

Investigators scoured the site on Sunday and Monday for clues as to what sparked the fire. The blaze began in a van and spread to a gas tank which then exploded. A police spokesman said the search for clues may take a long time.

State prosecutors have also been informed, and arson is not being ruled out. According to media reports the owner of the gas firm had been receiving threats on social network sites before the explosion.

“I heard what sounded like thunder at 5am,” Walther Benzinger told the Bild daily newspaper. “We came out onto the terrace. We could see huge fountains of fire.”

At least one van caught fire on Saturday morning which then spread to the gas tank. Sixteen firefighters were injured in the explosion as they tried to battle the van blaze.

Dozens of buildings were damaged and police estimated the cost at several million euros.