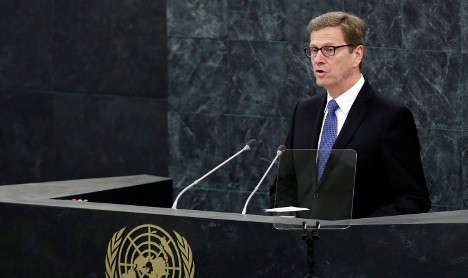 Speaking at the UN General Assembly, however, he demanded that chemical attacks in Syria be investigated by the International Criminal Court.

Westerwelle welcomed a resolution passed by the UN Security Council on Friday which ordered the destruction of President Bashar al-Assad’s banned chemical arms.

“These weapons must be completely destroyed in accordance with a firmly agreed timetable. Germany is prepared to provide financial and technical help to destroy these chemical weapons,” he said.

The resolution did not allow for immediate sanctions and despite European calls, did not permit the case to be referred to the ICC.

Westerwelle joined other western nations in blaming Assad’s forces for an August 21th attack near Damascus in which hundreds died.

“The use of chemical weapons cannot be allowed to go unpunished. This we owe not only to the victims in Syria, but also to future generations,” he told the UN assembly.