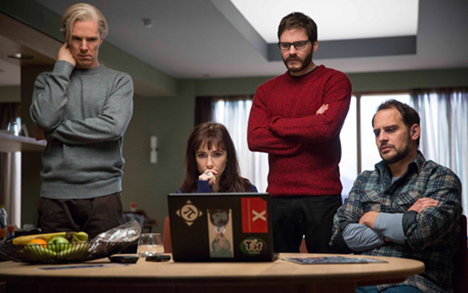 David Leigh and Luke Harding were part of the Guardian newspaper team that published WikiLeak’s first stories, before writing the book that has been adapted to create the star-studded blockbuster The Fifth Estate, due out in October.

While the film may have given whistleblowers the Hollywood hero treatment, former investigations editor Leigh said on Thursday that the only reason people were hacking was because the technology to do so now exists. Long gone are the days of sifting through piles of papers.

“It is very easy to gain access to classified information,” said Leigh at an event in Berlin to promote the German translation of their book WikiLeaks: Inside Julian Assange’s War on Secrecy.

The seeming ease in which huge volumes of highly secret information could be leaked signalled an “epochal moment” for Harding, he said.

The world was, he told The Local “in a state of fluidity, in which hackers and newspaper are suddenly working together,” thanks to the fact that governments are unaware of how tech-savvy the world has become.

“Intelligence agencies are trying to keep up” Leigh added. “Those over the age of 40 in government simply don’t understand technology,” he said. Secrets spilled by Manning and Snowden only emerged because digitally it is possible. “This has all happened because it can happen. People hack because they can,” he said.

Harding and Leigh were both present when officials from the British intelligence service came into the Guardian and insisted they smash up computers containing leaked files.

That night in the cellar of the paper’s HQ was, Harding said “part Stasi, part-pantomime. We destroyed our computers but not our ability to report.” It appeared the government failed to take into account the many ways of backing up data.

US army sergeant Bradley – now Chelsea – Manning leaked information to Assange and WikiLeaks exposing an incident in which a US army helicopter fired at civilians in Iraq.

He also leaked army logs from Afghanistan and Iraq exposing civilian casualties and a large number of diplomatic communications. Manning is serving 35 years in a US military prison after being convicted of violating the espionage act.

But neither he nor Edward Snowden, who more recently leaked information about the US government’s global spying on internet traffic, were senior government officials – rather two men who knew their way around a laptop, saw something they disagreed with, and felt too strongly to stay quiet about.

Manning collated top secret files and handed over thousands of pages of material to WikiLeaks’ Assange who in turn, Harding said, presented the Guardian with 40 slides. The newspaper published three of them.

The relationship between the two journalists and Assange, while once close, has all but collapsed. He remains holed up at the Ecuadorian Embassy in London to avoid extradition to Sweden where he would face charges of sexual assault and rape. German news magazine Der Spiegel remain in his good books, though.

The significance of being in Berlin to talk about transparency and surveillance escaped neither of the men. “As historical ironies go, it doesn’t get much bigger than this,” said Harding.