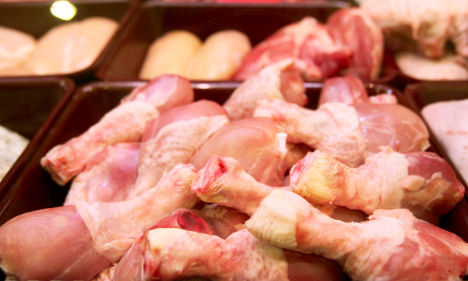 Researchers found bacteria resistant to some antibiotics in 12 of 20 fresh chicken leg products bought either on, or shortly before, their use-by date.

Five of the samples were found to have “superbug” MRSA bacteria, the most well-known drug-resistant pathogen. Although MRSA is not dangerous to healthy people, it can be deadly – and almost untreatable in the chronically ill or those who have recently undergone operations.

The study was reported in the October issue of the organization’s Test magazine. Drug-resistant bacteria in meat are the result of farmers routinely using antibiotics when raising animals the magazine said.

The study also found levels of other germs which exceeded guidelines set by the German society for hygiene and microbiology. This included both pseudomonades (bacteria which cause food to spoil) and enterobacteria (a family of bacteria including many of the pathogens which cause common illnesses, such as Salmonella and E. Coli), the taz newspaper added in its report on the study.

In two cases, researchers found levels of Listeria (a bacteria genus which can cause meningitis and lead to birth defects in pregnant women) which exceeded EU regulations.

Eight of the products contained campylobacter, is a major cause of food poisoning often found in raw chicken.

All five of the organic products in the test contained high levels of harmful bacteria (the best of the five only gained a mark of “satisfactory”), though none contained drug-resistant bacteria, probably due to the strictly limited use of antibiotics in organic farming.

The report advised that extreme care be taken when storing and preparing raw chicken. “These contaminants will never fully be removed from poultry”, the taz said, but “consumers should always be careful about hygiene” when dealing with it.

The report offered readers some hygiene tips. The meat should be well refrigerated, and used as soon as possible. People are advised to cook poultry thoroughly and at high enough temperatures for long enough.

They should wash their hands before and after handling it, as well as scrubbing all knives and chopping boards after use.