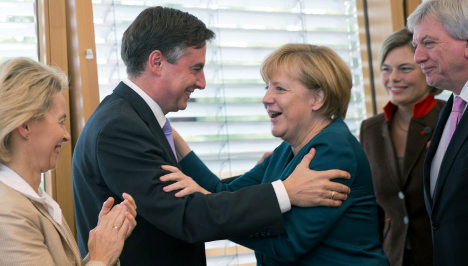 David McAllister, the former state premier of Lower Saxony, is expected to be the lead candidate for Angela Merkel’s Christian Democratic Union in the European elections in May 2014, the Welt newspaper reported on Thursday.

The 42-year-old, who was born in Berlin to a Scottish father serving with the British army and a German music teacher mother, would face a battle if he were to take on the job and get to the European Parliament.

One of his chief tasks would be to pull Britain’s Eurosceptic Conservative Party back into the mainstream centre-right group in parliament – the European People’s Party (EPP), the Welt said.

British Prime Minister David Cameron’s party left the EPP in 2009 as they did not agree with its European federalist ideas. The party has since become more Eurosceptic, and Cameron has even promised to hold a referendum within the next few years on whether the UK should remain in the EU.

In an interview with The Local in 2010 McAllister said: “I have links to the British conservatives and I’ve met David Cameron a few times.” But even so, trying to convince them to become more pro-EU might be a bridge too far for him.

The man known in Germany as “Mac” added: “We were sad that the Conservatives left the European parliamentary group. The CDU tried hard to convince them to stay.”

In the interview he also praised Cameron for his modernization of the Tory party.

But at the time he appeared to have little time for the British government’s position towards the EU. Asked if he had sympathy for the UK’s stance on maintaining sovereignty he answered: “That’s a British position and we have a slightly different position.”

The Welt reported that McAllister was preparing for his potential new role by visiting the EU parliament during its sessions in Strasbourg and Brussels. He is also learning French, the paper said.

They quoted one party source as saying: “He is looking forward to his new tasks in Brussels.”

McAllister lost his job as state premier of Lower Saxony after this February’s elections when the CDU lost control of the parliament, but he has remained the party’s chairman in the state.

He won the election and became state premier in 2010, becoming became the first British citizen to hold such a high office in Germany, and the youngest ever state premier.

Since losing his job, he has not made any moves towards a national political position in Berlin, a prospect the Welt suggested he was not excited by, being more interested in an international role.

As the CDU’s lead candidate for the EU elections he could also become Germany’s EU commissioner, the Welt added.

A spokesman for McAllister refused to comment on the article.