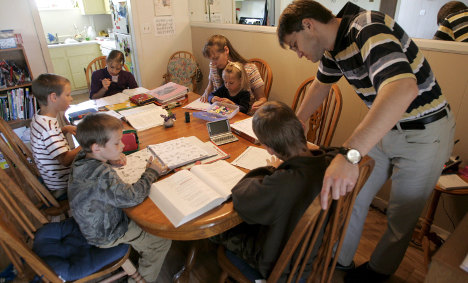 At a home-school community meeting deep in the woods of Baden-Württemberg, children kick around balls and parents grill sausages while chatting about their latest run-ins with the state.

An American woman who just gives her name as “Teri” says she and her German husband started home-schooling their two daughters so they could learn both English and German. “We want them to be fluent in both languages, in both cultures and in both politics,” she says.

But when local authorities discovered their daughters were not going to school, Teri and her husband received a letter demanding they enrol them. “The letter said we can fine you tens of thousands of euros. We can take your children away from you. We have the power to do this, and we have the power to do that,” Teri says. “It was very frightening.”

They and other families in the Baden-Württemberg area are now experimenting with something called the Uracher Plan, championed by Irene and Jonathan Erz.

Try to meet requirements at home

The Erz’s, who want to teach their children in English and German on their farm, hope to satisfy the educational legal requirements while still teaching mostly at home. They set up a system with some oversight from a local school and regular group classes with other home-school families.

Irene Erz sees no other way. “If you want to do pure home-schooling you have to run the risk of dealing with consequences,” she told The Local. “It is not legal and it is not allowed.”

A woman in her early twenties, who asks to not be named, says she may soon move with her husband and toddler to France.

Even though their toddler is only two years old, the couple wants to plan ahead so they can give him a Christian education. The plan sounds dramatic, but dedicated home-schoolers who want to stay in Germany have to fight to keep their kids out of schools.

Asking for asylum in the United States

Uwe and Hannelore Romeike left Germany in 2008 to home-school their children in the United States. The Romeikes, who are fundamentalist Christians, did not agree with what was being taught at public school in Germany and applied for asylum in the US.

An American court denied the Romeike’s latest appeal in July, but lawyers for the family plan to file a petition with the Supreme Court in the coming weeks.

“We think Germany, as a matter of national policy, is persecuting home-schooling families as a special group… and this interferes with their religious beliefs,” says Michael Donnelly, the lawyer representing the Romeike’s on behalf of the US-based Home School Legal Defense Association (HSLDA).

Germany is a frequent target for the HSLDA. It has led a campaign to flood authorities in the state of Hessen with phone calls, e-mails and letters in support of Darmstadt residents Dirk and Petra Wunderlich.

Education must include plurality of views

Authorities took away the Wunderlich’s children after the deeply religious pair refused to stop home-schooling. The children were only returned last week after the parents promised to enrol them in school.

The head of the Darmstadt regional services department Klaus Behnis told the Darmstadter Echo the state had a responsibility to guarantee all children’s right to an education that included a plurality of views. Without this, children would not have the chance to grow up capable of living in society, he said, and stressed that the Wunderlich children were taken as a last resort after the parents refused to have their educational levels tested.

Home-schooling fuels a heated debate in Germany. Families in favour of home-schooling say they are persecuted without cause. Critics point to the extreme religious views of some home-schoolers and question the safety of allowing children be educated without state oversight.

At the start of September police removed 40 children from a religious sect in Bavaria, after allegations of physical abuse – but after months of wrangling about whether the kids were being educated properly.

They must learn at a school

Then there is German law, which leaves little flexibility for interpretation. Unlike France, Austria and the United States, Germany requires not only compulsory education but also compulsory school attendance with only a few exceptions.

The German thinking is that school education promotes cohesion and prevents the development of parallel societies. “And it is in particular the Constitutional Court which has stated that the school has a special function to integrate the young generation into society,” said Hermann Avenarius, professor of public law at the German Institute of International Educational Research.

“There are risks [from home-schooling],” said Thomas Spiegler, a sociologist at Friedensau Adventist University. “But they are more to the individual students than to the society.”

Spiegler was one of the first to research the home-schooling movement in Germany. He said the risk level depended on the quality of education parents could give their children, which varied family to family.

Both Spiegler and Avenarius said they did not expect public sentiment to sway in favour of home-schooling in the near future.

“As long as [home-schoolers’] aversion to public schools is based on religious arguments, the public as a whole is not interested,” says Avenarius. “They see [home-schoolers] as people of sectarian religious groups and they think it’s strange.”