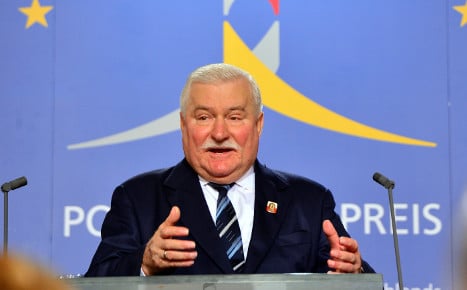 “We need to expand economic and defence co-operation and other structures to create one state from Poland and Germany in Europe,” he told Russian news agency Itar-Tass on Tuesday.

“We have travelled so far in our technical advancements that we are no longer located in our own countries,” he said.

Walesa, often credited with helping bring the Cold War to an end with his Solidarity trade union movement in the 1980s, said that in a changing world, Poles should not let the past affect their view of Germany.

“At the moment different ways of doing things and different systems hold us back but gradually everything will align and states will become like Lego blocks,” the one-time Nobel Peace Prize winner said.

Many Polish people still carry deep scars from the Nazi invasion in 1939, acknowledged Walesa, yet he said it was high time to forgive, if not forget.

“After the war, Germany fully confessed to all its dirty tricks,” said the 69-year-old former who was president of Poland from 1990 to 1995. “It is necessary to draw a line under the past, even if people did something evil. Until we do, wounds won’t heal.”