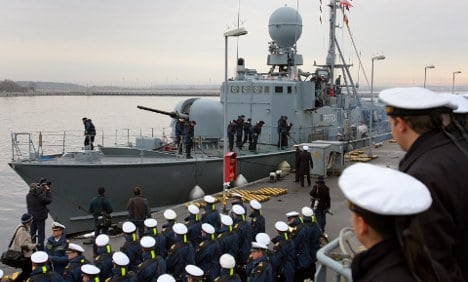 A defendant in the trial of six first mates accused of attacking the ship’s bosun – the equivalent of a staff sergeant in the army – on a German Navy warship earlier this year has said it had been meant as a joke.

The 27-year-old bosun told a court in the north eastern coastal city of Rostock that the men had wanted to pay their victim back for an offensive remark.

The first mates – the equivalent of sergeants in the army – are accused of dragging their German-born superior officer of Thai descent out of his bunk late at night.

They then used five-centimetre-wide tape to restrain the half-naked man to a table before scrawling “this is where the mongs live” in permanent marker on his lower legs.

The attack occurred late one night in February this year, on board the German warship Hermelin, docked in Beirut harbour, and had been sparked by an earlier incident, the defendant said.

When an officer had asked during a medical examination where the officers and crew slept, the bosun replied: “Officers sleep in the cabins, the mongs sleep on deck.”

The defendant went on to explain that the alleged mutinous attack had been a spontaneous prank to get their own back on the bosun, who they normally got on well with.

At the time questions were raised over whether the use of the word “mongs” suggested a racist motive to the attack, but the sailor said the word was often used on board the ship and had nothing to do with the bosun’s ethnic origin.