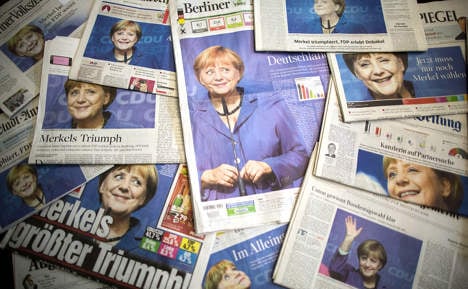 But despite the initial euphoria, Germany’s press agreed on Monday that gaining a narrow absolute majority could be a poison chalice for Chancellor Angela Merkel’s Christian Democrats (CDU) and their sister party the Christian Social Union (CSU).

Der Spiegel news magazine noted on Monday that the CDU’s initial excitement at the possibility of ruling alone may have been ill-considered. “A single-party government, and one which took the majority by only one or two votes, would have been rather stressful” it noted.

Don’t be too quick to call it a triumph for the CDU/CSU, agreed the Tagesspiegel. “An absolute majority is in itself a great thing. But an absolute majority of just a few votes, that’s hell.” Merkel has to find a coalition partner, to form a stable government – otherwise “every single vote on further euro zone bailouts will be a gamble,” it added.

The biggest blow for the CDU was the annihilation of the party’s preferred ally the FDP, said the right-leaning daily Welt. “It can happen so fast. The fall of the FDP was spectacular, and unique in Germany’s history,” a fall the paper called “righteously earned. Elimination was justified. Liberals love a performance-based outcome, so really they have to appreciate this brutal result.”

And with the FDP’s fall came the rise of newcomer eurosceptic party Alternative für Deutschland (AfD). The success of the seven-month-old protest party, which ultimately also missed out on seats in parliament, is nevertheless a worrying development, the German press said.

“The very good result for the AfD … destroys all hopes that the protest troupe will disappear as quickly as it appeared. What the old guard always warned against has now become a reality: a party right of the Union, but not far-right.” And this is worrying, wrote Welt, especially with the FDP out of the picture. “Germany needs the FDP, desperately” as a party which offers voters something between the CDU and the AfD.

Now, with their preferred partner vanished overnight, the CDU is looking in need of friends, wrote Frankfurter Allgemeine Zeitung. For once none of the opposition parties are jostling for position to join government. “After this election a lot of things are not the same … The Union has lost its most important ally … at the very moment of their biggest success it is in some ways more alone than it has ever been.”

A grand coalition is the only realistic course for Merkel, speculated the left-leaning Süddeutsche Zeitung, but it is clear the Social Democrats (SPD) will play hard-to-get. Defeated chancellor candidate Peer Steinbrück was still rejecting all talk of a coalition with the CDU on Sunday night, stressing his party would be better off in “strong opposition.”

This “expressed exactly what many Social Democrats are feeling,” the paper said. “The memories of the disastrous 2009 election are still fresh. Many believe the SPD is still suffering” for that. “The party will make a fuss, will demand a high price … to satisfy the grassroots. Merkel would have to move an appropriate amount towards them to make a half-way stable coalition.”

The Süddeutsche asked – “does the [SPD] want, from a position of weakness, to enter into a grand coalition, or does it want to leave Merkel hanging and wait until the day a left-wing majority in the Bundestag overpowers her?” Probably something in between, wrote the paper, the SPD will play up their advantage in any coalition negotiations by “exploiting the Union’s loneliness.”

The CDU know this, which is why papers believe the more attractive option now seems to approach the Green party to form a black-green coalition. Could Merkel have been planning this all along? asked Bild daily tabloid. The clue lies in her jewellery choice for Sunday night.

“Around her neck, Merkel (59) had a string of black stones and light green pearls” which, the Bild mused, may have been foreshadowing future coalition arrangements. “The hunt for a partner continues,” it added.

“Over champagne and wine [on election night] some Union politicians began to brood. Maybe black-green would be the better variation?” added the Süddeutsche Zeitung. As it is, until SPD head Sigmar Gabriel “brings round his grassroots,” Merkel “can mull over whether black-green really could be a refreshing Alternative for Germany.”