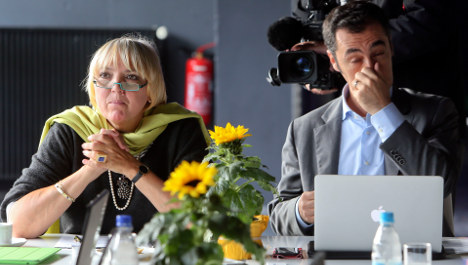 Party leader Claudia Roth confirmed to press on Monday afternoon earlier rumors that the entire Green Party board would leave their positions ahead of the party conference this autumn.

The result had been a “heavy and painful defeat,” Claudia Roth said, and the leadership would step down to make way for a “personnel realignment.”

Voters turned away from the Greens on Sunday, with the party taking 8.4pc of the vote down from 10.7pc in 2009.

The news will be no surprise for the party grassroots, who predicted on Sunday night that the disappointing result would mean heads would roll. Others felt that a change was just what was needed to re-enliven the party’s fortunes.

“The older generation of Green party politicians, for example Jürgen Trittin and Claudia Roth have done a lot but now it is time for a change,” said Andreas Audretsch, a member of the party told The Local outside at the Greens election party in the Columbiahalle, central Berlin on Sunday night.

“A generational change is needed – not that the current leadership is not of interest to younger people – I think they did really well and enthused young people,” agreed Anna Grebe, 30.

“But I think young voters – and young non-voters – have to be attracted to the party even more – and for that we will need younger people at the top,” she added.

Grebe joined the Green party last night after the result which left many disappointed that they would not be contributing to a big sea-change in German politics by kicking out Angela Merkel.

“I have been thinking about joining for a long time,” she told The Local outside at the Greens election party in the Columbiahalle, central Berlin. “I finally joined today after the results were announced – but I didn’t join because I felt sorry for them.”

The general agreement as supporters digested the result was that votes were lost not due to the party having the wrong policies, but because it was unable to get its message across. Many were committed to holding an honest debate about how to do better next time around.

Among the crowd watching the results on screens by the stage which usually hosts rock bands, party member Notker Schweikhardt was one of those doing some soul-searching as he saw his plans to become a Green MP dashed. “I was on the list but now won’t make it as an MP,” he said.

“We make mistakes largely in our communication, not in our programme – we talked about increasing taxes for seven percent of people rather than talking about reducing tax for 93 percent of people,” he added.

Schweikhardt said he expected Trittin, head of the parliamentary party and one of the two lead candidates in the election, would probably move into European politics.

“I’d like to see him go to Europe. Daniel Cohn-Bendit has said he doesn’t want to continue, and I think it would be good for Trittin and good for us to have him there. It’s important to have a strong person there,” he said.

Green party volunteer, Matthias Schröter, 32, said he wanted to see renewal and a return to the basic Green issues.

“Tomorrow there is a new report from the IPCC [Intergovernmental Panel on Climate Change] and the debate will change again, and people will be talking about our topics again,” he said.

“It has been very frustrating – it’s difficult to talk about the issues that really matter when people are talking about one candidate sticking his finger up, and the Chancellor’s hands,” he complained.

He said he wanted the Greens to become more independent and stand on its own merits to become less beholden to the Social Democrats (SPD).

“There are large differences between us and the SPD. We should campaign alone and then see what the other parties really mean on our core topics and make decisions accordingly,” he said. “We should even talk with the Linke and figure out if they can be realistic in their policies or if they remain permanently in election campaign mode.”

The Linke overtook the Greens on Sunday night to become the third biggest party in the country. It might be an idea for the Greens to take a look at their strategy, if not their policies.

Meanwhile senior Greens on Monday continued to refuse to speak about faint possibilities of hooking up with Merkel’s CDU in a coalition; although one did say off the record that the ball was in the chancellor’s court – it was up to her to come and ask them, unlikely as that may seem.