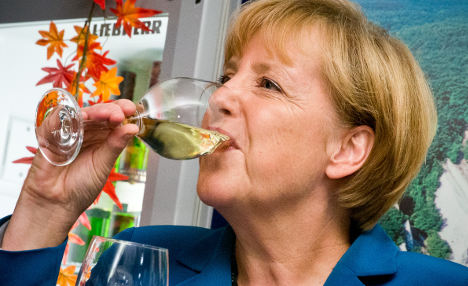 After a campaign that banked on Merkel’s image as a calm, sensible and reassuring eurozone crisis manager, she led her conservative Christian Democratic Union (CDU) close to its first absolute majority in half a century.

But she will still need a coalition partner to rule with. Merkel said on Monday she was “open” to negotiations with her centre-left rivals the SPD on forming a coalition government.

“I had first contact with the SPD chairman [Sigmar Gabriel] who understandably asked that the SPD first hold its party meeting on Friday,” she told reporters.

True to her style, Merkel pledged that “we will use the result responsibly and carefully,” but stressed that she intends to serve out her full term till 2017, as jubilant supporters yelled “Angie, Angie, Angie”.

Congratulations poured in from across Europe, while the euro firmed in Asian trade, with investors cheering the “continuity” Merkel provided.

The CDU and its Bavarian allies, the CSU, demolished their centre-left opponents with what a beaming Merkel called a “super-result” of 41.5 percent, its best in 23

years. The CDU/CSU came just a few seats short of an absolute majority.

However, the demise of Merkel’s junior allies the pro-business Free Democrats (FDP) after more than half a century in parliament meant she now has to look for a new coalition partner.

The most likely candidate was the centre-left Social Democrats (SPD), who

that “the ball is in Merkel’s court. She has to put together a majority”.

An outside option would be a Merkel coalition with the ecologist and left-leaning Greens, who won 8.4 percent, although it would be an uneasy alliance given the yawning policy differences between the two parties.

Cautious and guarded as ever, Merkel said late on Sunday she would wait for

the final numbers and than proceed “step-by-step”.

“We won’t start a va-banque game,” she said, using a gambling reference to a highly risky endeavour.

Merkel herself said that – after other parties were bruised in previous

coalitions with her – “perhaps we’ll no longer find anyone who wants to get together with us”.

Indeed, early analysis showed the FDP performed so poorly as voters who supported them in the 2009 election opted for the CDU this time.

Either way, observers expected days or even weeks of tough negotiations over policies and ministry posts between potential partners.

Whatever shape the new government will take, the impact on the eurozone and

the rest of the world was judged to be marginal by commentators.

would remain committed to a “prosperous Europe”.

French President Francois Hollande congratulated Merkel in a phone call in which both agreed “to continue their close cooperation to meet the challenges of the European project”.

continuing to work closely” with Merkel.

working poor, it would be expected to want to soften some of its own tough

labour reforms from a decade ago and demand a national minimum wage.

The parties would probably agree on a minor stimulus through infrastructure spending, a modest hike in top marginal income taxes and a gradual reduction in subsidies for solar and wind energy, said the Berenberg Bank note.

Teaming up with the SPD, as Merkel did 2005-09, would make it easier for her to push policy through the upper house representing Germany’s 16 states, where the opposition “red-green” alliance has a majority.

The big losers of the evening, Merkel’s junior partners the FDP, crashed

out of parliament for the first time since 1949, having plunged some 10 points since the last election amid ugly party infighting.

Vice Chancellor Philipp Rösler called it “the most bitter and sad hour” for his party, which also includes outgoing foreign minister Guido Westerwelle, and which was headed for deep soul-searching and a likely decapitation of its leadership.

The conservatives gained fewer votes than the combined left of the SPD, Greens and far-left Linke, which won 8.6 percent.

However the Linke, successor to East German communists, has consistently been rejected by the SPD and Greens as a coalition partner.