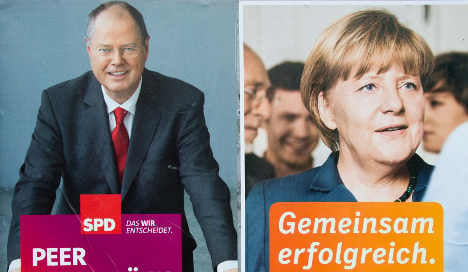 In terms of the number of stops and distances covered, Merkel and Steinbrück would give any backpacker a run for their money. The two are travelling the length and breadth of the country in a last attempt to win over undecided voters and mobilize support to turnout on Sunday.

Merkel spent Wednesday in Schwerin, the capital of the northern state of Mecklenburg Western-Pomerania, where her Christian Democrats are in a “grand coalition” with the Social Democrats.

Meanwhile, Steinbrück battled for votes in the city of Oldenburg in Lower Saxony, where his party rules with the Greens. Both also stopped over in the city state of Hamburg, where the Social Democrats rule with a majority.

But will the candidates’ Wanderlust translate into Voterlust??

From Thursday their paths diverge dramatically as both leaders seek to shore up support in their heartlands.

Merkel is heading down south to Bavaria, where her sister party, the Christian Socialist Union, won a landslide victory in the Bavarian state election on Sunday.

Steinbrück will spend Thursday attempting to woo voters in Berlin.

Friday will also see Merkel stay in the conservative heartland of Bavaria, where she’ll be doing her best to charm her way through Munich. Steinbrück will be spending the day in Wiesbaden, the capital of the state of Hesse.

And there’ll be no let-up in the schedule at the weekend, with Merkel travelling back up to her seat of Straslund in Mecklenburg Western-Pomerania and Steinbrück making his way to Bonn, where he’ll be casting his vote in Sunday’s ballot.

The SPD candidate toured the party’s industrial Ruhrgebiet heartland on Tuesday and will be returning west for the weekend, while Merkel mainly sticks to the south and east of the country.