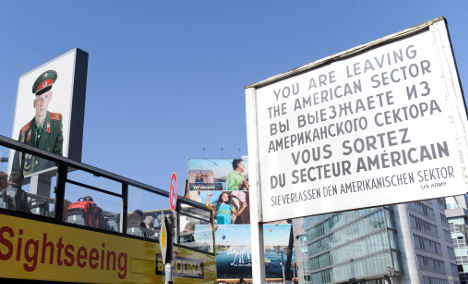 Alan Wolan from Los Angeles told the Süddeutsche Zeitung newspaper how he took the sign marking the famous Checkpoint Charlie crossing between East and West Berlin in 1990 after the wall fell.

The sign reads “You are leaving the American sector” in Russian, French, German and English. It is now a tourist attraction at Checkpoint Charlie.

But Wolan claims the original has been in his Los Angeles garage for 23 years. The 50-year-old was living in Berlin at the time when, on June 23rd 1990, he claims he took the sign.

He told newspaper the BZ he was selling GDR (East German) souvenirs at the Checkpoint at the time. “I often thought, hey owning this sign would be the best thing,” he said.

The US Army closed the border crossing in the summer of 1990 and Wolan said that he and three friends got a saw and rented a truck. On the night on June 22nd into the morning of June 23rd, they headed to the checkpoint and cut the sign off. Wolan claimed it only took 15 minutes.

He said: “It was a crazy time. Everyone was taking stuff from around the Wall,” the BZ reported.

When Wolan returned to the States in 1994 he put the sign in a container and shipped it to America. He claims he is now selling it as he doesn’t need it and the money would change his life. He is hoping for €1 million, the BZ reported.

The newspaper said the theft was never reported by the US army and less than 24 hours later a new sign was in place.

Regine Hildebrandt from the Berlin Wall museum at Checkpoint Charlie disputed Wolan’s story and claimed that they had the original sign. “It was given to us in 1991 by US Colonel Alfred Baker,” Hildebrandt said.

But there is a subtle difference between the two signs. The Checkpoint Charlie museum sign has the number 16 written at the bottom, whereas there is no number on Wolan’s.

Berlin historian Florian Weiß said: “The sign at Checkpoint Charlie would normally have the number four on it.” But sometimes when signs were replaced they would be put up again without a number – like Wolan’s, the Berliner Zeitung reported.