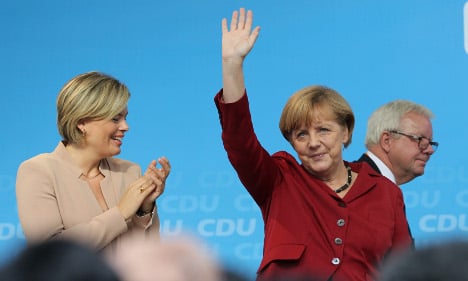 Merkel, 59, mowed down scores of male rivals on her rise to the top, however she has rarely promoted women’s causes during her eight years in office.

And in her bid for a third term in a September 22nd general election, she has strikingly played up her feminine side in a way that has stunned some observers.

“The chancellor is working on a bit of image improvement largely aimed at women voters and meant to transform Merkel the eurozone crisis-solving machine back into a politician with a human face,” news weekly Der Spiegel said earlier this year as Merkel began her pivot.

Current polls indicate she enjoys a strong lead among female voters over her chief rival, Peer Steinbrück of the Social Democrats, as she does with the electorate as a whole.

With 32 million female voters versus 30 million male, the women’s vote will be crucial in what is expected to be a tight race for a ruling coalition.

On her campaign website www.angela-merkel.de, the leader nicknamed “Mutti (Mummy) by her own party for her soothing, no-nonsense style touts her domestic proclivities.

Forbes magazine’s most powerful woman in the world for seven of her eight years in office and the proud recipient of a doctorate in physics is seen heavily made-up, gazing adoringly at her chemist husband.

One could be forgiven for thinking he was the candidate.

“At home far from the hurly-burly of politics I can free my mind, read and gather my strength with my family,” she writes, in what several commentators called a turn at “playing the housewife”.

“I love to cook and my favourite dishes are roulades (braised meat rolled around a filling) and potato soup. My husband rarely complains. Except when I don’t put enough crumble on the cake.”

Journalist and author Bascha Mika said Merkel was playing a tactical game with what she called the sexist term “Mutti”.

“She took what was an insult and transformed it into an image as mother of the nation — she cares, she has everything under control,” Mika told AFP, echoing what commentators have called Merkel’s “political jujitsu”.

“I find that so clever but also so insidious because she treats voters like children and says ‘don’t worry, I’ve got this’. It’s extreme de-politicisation.”

Merkel’s rivals accuse her of snuffing out unpleasant debates on issues such as military action in Syria or debt forgiveness for Greece to lull voters into complacency.

In May, Merkel spoke to women’s magazine Brigitte, revealing she finds “nice eyes” attractive in men and has a “camel-like” ability to store energy for sleepless all-night summits.

During the rollicking discussion with two of its journalists at a Berlin theatre, she made a telling comment: “I’m not a feminist but I’m an interesting case when it comes to potential female role models.”

Mika noted that Merkel’s life and times, including her upbringing under communism, indeed made her an interesting case.

“She can be tough, unemotional, ruthless and merciless but she doesn’t make a show of it in the way that Clinton or Thatcher might have done to hold their own with men. Merkel doesn’t need to stand up and say ‘I’m a strong woman’ because she simply is,” she said.

“Women from (communist) East Germany tend to be wonderfully pragmatic –they grew up with women in the working world so they see nothing unusual about it,” said the Polish-born Mika.

Consequently, Merkel has steadily co-opted her opponents’ issues, such a boosting benefits for working parents including incentives for fathers to take paternity leave.

At the same time she has reluctantly backed a bonus for stay-at-home mothers favoured by her Bavarian allies, the Christian Social Union, who face a re-election battle on Sunday.

And under pressure from her Labour Minister, rising star Ursula von der Leyen, Merkel has now accepted the goal of a binding 30-percent female quota in company boardrooms from 2020.

Meanwhile Steinbrück has stumbled from gaffe to gaffe as a candidate, notably putting down Merkel’s popularity to a “women’s bonus” she enjoyed rather than her achievements in office.

He sparked a storm of derision and online ridicule on Thursday by allowing himself to be photographed making the vulgar middle-finger gesture.

But there is already palpable excitement about a potential female successor for Merkel; Hannelore Kraft the leader of Germany’s most-populous state North Rhine-Westphalia.

Much has been Merkel’s impact that if, as her aides say, she opts not to stand for re-election in 2017, the race could well shape up as battle between two women, Kraft and von der Leyen.