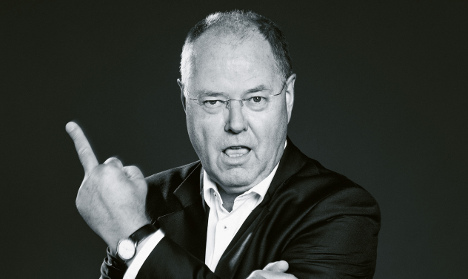 The man who wants to be Germany’s next chancellor was pictured on the front of the weekly magazine supplement of the Süddeutsche Zeitung daily’s Friday edition.

The unflattering black-and-white portrait of the Social Democrat (SPD) candidate Peer Steinbrück in suit and tie graces the cover of the magazine.

But the image of the 66-year-old flipping the bird, while sneering into the lens caused a storm ahead of the September 22nd vote, with attacks raining down from politicians and in the Twittersphere.

The provocative photograph has gone viral after a blogger published edited versions of the photo showing the SPD leader’s outstretched digit in humorous situations.

The Tumblr blog, “What Peer’s got his finger in” features versions of the photo in which Steinbrück’s finger is being licked by an animated kitten, taking the place of God’s finger in Michelangelo’s Sistine chapel fresco, and spinning a basketball.

The blog has spawned a counterpart Twitter account, @peersfinger, which has already garnered almost 1,000 followers since the original photo was published.

CLICK HERE to see some of the funny Steinbrück photos

The @peersfinger Twitter account has been compared to the satirical @schlandkette account, mocking the necklace worn by Merkel in the TV debate with Steinbrück on September 1st.

And @schlandkette has commented on the @peersfinger feed, writing “I can hardly keep up with @peersfinger. Whatever, I’m slimmer.”

Other tweets from users included “Coalition of my [email protected] and @schlandkette”, and “I would vote for Peer Steinbrück’s middle finger”.

Communications expert Stephan Lermer judged the picture, “a pubescent gesture, extremely vulgar – and this from a public person and chancellor candidate, a role model, who would represent 80 million Germans on the world stage.”

Lermer predicted the picture would become iconic and define Steinbrück, the way Albert Einstein is best remembered for the photo with his tongue out.

“As Germans, we have to cringe,” he said. “It will cost him votes. The gesture is unappetizing. It lacks class. It will especially turn off elder, conservative voters … He thought he could score with irony, but the Germans are a serious people.”

BUt SPD chief Sigmar Gabriel jumped to the defence of the candidate, saying on Twitter that Steinbrück “used an ironic photo interview to ironically show emotions”.

Steinbrück defended himself late Thursday at a campaign event in Munich, where his party faces crucial Bavarian state elections Sunday.

In the photo essay with the Süddeutsche Zeitung’s magazine, he said, “You are asked questions and have to respond with gestures, grimaces, emotions. You’re acting. And I hope that the country will understand that the grimaces and gestures

relate to the question, and show a sense of humour.”

Other parties sought to take advantage of the photo. “This gesture is unacceptable for a chancellor candidate,” said economy minister Philipp Rösler of the Free Democrats, Merkel’s junior coalition allies. “Something like that is just not on.”

On Twitter under the tag #stinkefinger (middle-finger) one writer said: “Steinbrück’s middle-finger seemed to say: ‘Goodbye then, you election w*******.’ At least he’s getting a totally awesome exit.”

Another judged the gesture as “diggin’ for street credibility” while a third wrote: “Unbelievable! It’s not a fake! I can’t imagine a chancellor like that.”

The image of the gaffe-prone Social Democrat candidate was taken for a photo-essay format called “Don’t Say Anything Now” in which subjects are asked to respond non-verbally to questions.

The gesture by the self-styled straight-talking politician came in response to a question over his campaign gaffes, including causing offence in Italy by calling former premier Silvio Berlusconi a “clown”. The journalists’ question was: “Pannen (mishap) Peer, Problem Peer, Peerlusconi – you don’t have to worry about a shortage of nicknames, do you?”

His picture stands in stark contrast to Merkel, who is portrayed on the cover of Friday’s Economist magazine on a pedestal overlooking European landmarks with the headline “One woman to rule them all”.

The Süddeutsche newspaper said had Steinbrück made the offensive gesture in a public place, would have faced a fine of €600 to €4,000, but it said that, given his negative image during the campaign, Steinbrück’s “frustration is understandable”.

Newspaper Die Welt said Steinbrück’s ironic gesture showed he was now at ease on the campaign trail but would likely be remembered as part of the “series of many blunders and scandals”.