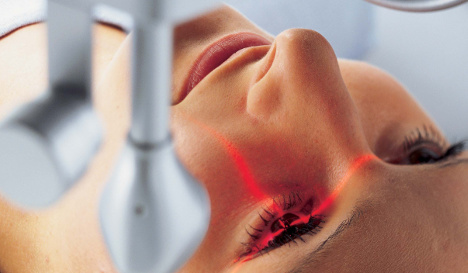 Crowds snaked their way for 200 metres along the street in the town of Gera, Thuringa, on Monday from 5.30am, day the eye surgery opened, newspaper the OTZ reported.

Dr Steffi Habrecht, 55, who had previously practiced medicine for 19 years in her home town of Chemnitz, said she was “totally overwhelmed by the rush” of people wanting appointments at her surgery, she told the Bild newspaper.

Habrecht said she understood the annoyance of those who had queued for hours and, in some cases, still had not got an appointment when she closed at 4.30pm. But, she added: “Please don’t take it out on the doctor.”

By the end of the day, Habrecht’s appointment list was booked up for the rest of the year.

Habrecht’s clinic brought the total number of practices specializing in eye treatment in Gera, which has 95,000 inhabitants, to eleven.

Despite the lack of sufficient medical facilities to cope with demand, the Association of Registered Health Insurance Physicians (KV) – deemed Gera “over-equipped” for its population and average age.

But the association’s national counterpart, the KBV, charts a decline in numbers of both specialized doctors and GPs across the country.

The organization estimates that 3,000 GPs’ surgeries are empty nationwide, while affluent areas routinely have more specialist doctors per capita than poorer districts.

For example, Marzahn-Hellersdorf in Berlin has 30 psychotherapists serving 251,879 citizens. The 319,289 inhabitants of richer district Charlottenburg-Wilmersdorf, meanwhile, have 526 psychotherapists to choose from.

The shortage of medical professionals is most serious outside Germany’s cities, however. KBV chairman Dr Andreas Köhler told the Bild: “It’s getting harder and harder to find a doctor out in the country”.

PARTNER CONTENT
European healthcare: how does your country rank?
Url copied to clipboard!