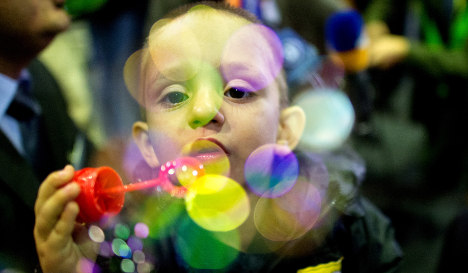 A chartered flight from Lebanon brought 107 refugees to Hanover in Lower Saxony.

The refugees, including 40 children, will be taken to Göttingen. They will not have to go through normal asylum procedures but are being given resident and work permits immediately.

Germany has granted the exiles two-year residence permits and could extend them if the war continues.

Pistorius said Germany was “duty bound” to help and called for the country to take in more than the 5,000 it had pledged.

Melissa Fleming, spokeswoman for the UN high commissioner for refugees (UNHCR), said: “Germany’s humanitarian assistance programme provides for up to 5,000 places for Syrian refugees, and as such is the biggest relocation programme currently in existence for the Syria crisis.”

She said the German scheme was a “vital and potentially life-saving tool for helping particularly vulnerable refugees.”

“These include women and girls at risk, people with serious medical conditions that cannot be treated in the host country, survivors of torture and others with special needs,” she added.

The overwhelming majority of the two million Syrians who have fled their conflict-torn homeland are in neighbouring countries Lebanon, Jordan, Turkey and Iraq, which along with the UNHCR have appealed for more international help to shoulder the burden.

“Their economies, their societies, their infrastructures are under extreme strain,” she said. “We’ve visited towns and villages which have more Syrian refugees than local residents. Therefore this programme that Germany has offered is setting an important example. We hope that more countries in Europe and around the world will come forward with similar schemes.”

With no sign of an end to the Syrian civil war, which broke out in 2011, UNHCR has appealed to rich countries to offer a haven for some 12,000 of the most vulnerable refugees.

The United States has also told the UNHCR that it was willing to consider an unspecified number of cases, and talks are under way with Britain, Fleming said.

Fleming said it was crucial for all countries to share the burden by taking in Syrian asylum seekers who arrive under their own steam.

Last year, some 24,000 Syrians claimed asylum in Europe. Between January and July this year, another 20,776 claimed asylum, according to UNHCR data.