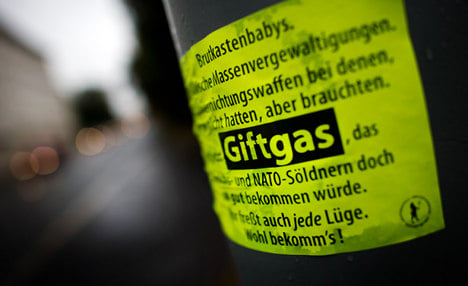 Chancellor Angela Merkel described the Kremlin’s proposal as “interesting” but added that she hoped it would be put into place quickly and not simply be used to “buy time.”

“Today there was an interesting proposal from Russia, which called on Syria for the first time to place its chemical weapons under international control,” said Merkel on German public television speaking to a group of German voters.

“If this is followed by action and not about buying time and this materialises, then Germany will push for that road to be followed,” she said.

“Everything must be tried to achieve this without military intervention,” she added, referring to the threat of US-led military action to punish the Assad regime for its alleged chemical attack.

Merkel, who is seeking re-election for a third term in September 22 poll, also again stressed that “Germany will under no circumstances” be part of any military strike.

France, which has been pushing for military strikes against the Syrian regime held responsible for chemical weapon attacks on its own people, also gave a cautious welcome to the proposal.

Fabius also demanded that those behind the alleged August 21 chemical attack that killed hundreds outside Damascus be tried by the International Criminal Court in The Hague.

Assad “must commit without delay to put his entire chemical arsenal under international control and have it destroyed”, he said adding that this “operation must be carried out on the basis of a binding Security Council resolution, with a short timetable and firm consequences if he does not respect his commitments.”

And the International Criminal Court must get involved because “those responsible for the August 21 chemical massacre must no go unpunished”.

“We demand precise, quick and verifiable commitments by the Syrian regime,” he added.

France and the United States claim growing international support for military strikes to punish the Syrian regime for the alleged chemical attack, while Russia, Syria’s staunchest ally, on Monday seized the diplomatic initiative with its plan to head off the threat of US military strikes.