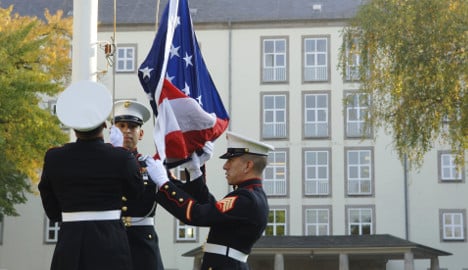 The helicopter circled low over America’s consulate in Frankfurt on August 28th on the orders of Chancellor Angela Merkel’s chief of staff Ronald Pofalla, magazine Focus reported on Monday.

Pofalla had declared the NSA spying scandal – sparked by whistleblower Edward Snowden’s revelations of a mass surveillance programme – over.

But the helicopter flight, whose mission was to gather evidence of the supposed spying station – hints at the German government’s lack of trust in its ally’s spying activities on German soil.

The helicopter slowly flew twice over the consulate at a height of 60 metres to photograph the site, Focus reported.

It was seen by the Americans, and Focus reported the US embassy in Berlin lodged a protest with Germany’s foreign ministry.

But that was denied by the US embassy. A spokesman told The Local: “The helicopter incident was the subject of an embassy conversation with the foreign ministry but no letter of complaint was sent to the German government.”

A foreign office source told Focus that the fight was a “strong provocation”.

Chinaware inside the consulate was damaged in the flight, Focus reported, but no evidence of a listening station was found.

Merkel’s spokesman Steffen Seibert refused to comment directly on the flight but said Germany’s security services would respond within the law when they suspected foreign secret services of spying, newspaper the Welt reported.