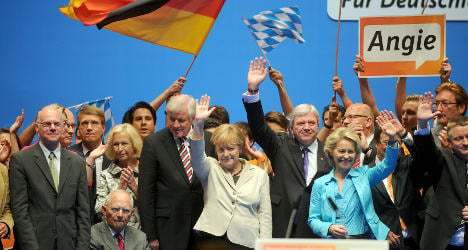 The centre-right CDU have been in power since 2005. Founded in 1945, the CDU formed the first elected government of West Germany under Chancellor Konrad Adenauer.

Initially, its values centred around building German public life on “Christian, democratic and federalist foundations,” and among its founding aims were integrating Germany into Europe, and reunifying the country – as it was split in two at this point.

What do they stand for now?

The CDU election campaign this year focuses on Germany successfully weathering the financial crises of the past few years – the slogan “Germany’s future: in good hands” spells this out. In a nutshell, they stand for protection and promotion of the family, keeping a competitive economy and keeping taxes low.

However, under Merkel the CDU has moved slowly towards to political centre, with its efforts to phase out nuclear power and softening towards gay marriage.

Hamburg-born, East Germany-raised Angela Merkel (59) has been Chancellor since 2005. She has a doctorate in physics and joined the party in 1990, becoming deputy speaker in East Germany’s first elected government.

As a Protestant pastor’s daughter raised under Socialist rule, Merkel’s upbringing does not tick the typical CDU boxes, but since becoming chancellor in 2005, she has gained a reputation for determination and quiet confidence.

The CDU matters because there is a good chance it will be voted in for another term. The party may, however, have to find another coalition partner as its current – the Free Democrats (FDP) – has been struggling in the polls for some time.