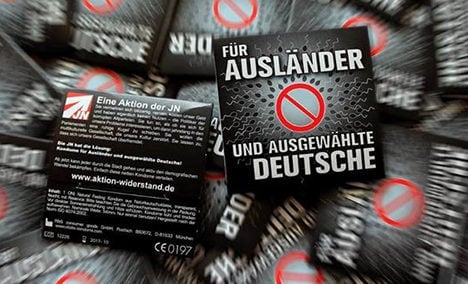 The Young National Democrats (JN) – a youth branch of the far-right National Democratic Party (NDP) – ordered customized single condoms with the slogan on, in what it called on its website a “knowingly provocative campaign.”

“Trousers down, rubber on,” the site reads. Condoms have, it added, been sent to politicians, ministers and foreign lobbyists known for supporting immigration.

Top Green party politician Volker Beck – a leading anti-fascist campaigner – received one of the condoms in the post on Thursday, the Hamburger Morgenpost newspaper reported.

He soon took to the internet to blast the delivery, criticizing the company which makes the Vitalis condoms, R&S. He called on them to donate the money spent by the JN on the condoms to be given to a foundation which works to fight against rightwing extremism and racism.

R&S deactivated its Facebook site for 24 hours due to an onslaught of criticism from users. It then said it would give the money to a good cause, and donate 10,000 condoms to a charity.

It also apologized explaining that it would try harder to monitor the slogans which people put on customized condoms.

“We regret wholeheartedly that such a mistake has been made and that our condoms are being used for propaganda,” the statement, published on Facebook read. “We distance ourselves from the political message and aim and would like to apologize to any vilified parties.”