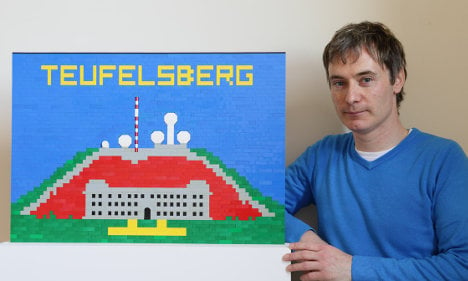 Stand on the top of a tall building in central Berlin and look west. One shape on the skyline will grab your attention – a huge white sphere, standing like a giant golf ball sunk into a tee on top of a hill.

It was from here that thousands of American, and some British agents, listened in on their Soviet rivals during the Cold War from spy station Teufelsberg, which translates as Devil’s mountain.

The presence of Teufelsberg spy station, codenamed T.H.E. Hill, is no secret, but what went on there is. The work is still classified and this mystery has led to myths – one popular one being that the hill housed a secret underground submarine base.

But some light on daily life at Teufelsberg has come from an unlikely source – Northern Irish artist Brendan Jamison. He is better known in Britain for making sculptures from sugar with his work appearing outside the Prime Minister’s house – 10 Downing Street, and at the Tate Modern.

The 34-year-old turned his attention from sugar to spies after watching a BBC documentary in 2009 on German reunification which showed a short clip of Teufelsberg. “Since then the world of espionage has fascinated me,” he told The Local.

Jamison decided to visit the now abandoned spy station and was struck by the atmosphere and architecture of it. He started sketching and blogging about it a year ago in preparation for an art exhibition on the spy station which opened in Berlin on Thursday.

The blog soon came to the attention of ex-spooks who worked at Teufelsberg.

“It was not long before they made contact with me,” he said. The former spies were keen to tell him more about life at Teufelsberg.

Jamison had to give them code names for the exhibition and could not use much of the information they told him, but he garnered enough to fill 30 files which form part of the exhibition.

He learned how the trademark white spheres were actually vulnerable in high winds and to stop them collapsing the workers had to use compressors from a former German U-boat to put enough pressure on the dome.

“They (the ex-spies) were also very good at dispelling myths,” he said. “For example there was one that there was an underground submarine base [in the hillside].”

This, it turns out, was untrue, but there was a bunker in the hillside and the spies appeared keen to spread the myths while they worked there.

They told Jamison how at their accommodation at Andrews Barracks in west Berlin there was giant mural, which they compared to a James Bond base. It showed a submarine and they spread rumours themselves of the secret submarine base under Teufelsberg.

“Because we are not spies ourselves it seems romantic but in most cases it was boring and involved sitting there with head phones on for hours so they revelled in the clichés,” Jamison said.

CLICK HERE for pictures of how Teufelsberg used to look

The station was manned for 24 hours a day through three eight hour shifts and the employees were selected for their intelligence – they were deemed to be in the top ten percent of US Army.

Jamison said: “They told me it was an extremely fun time. Many said it was the best three years of their lives. For example they played pranks with peanut butter sticking it down tubes which would stop the equipment from working properly.”

The Belfast-born artist added: “The last year has been unbelievable. It is by far the most fun project I have ever done. It excites me on every possible level.”

At the end of the month Jamison will meet a group of the former spies at a reunion to mark 50 years since the spy station opened.

Many are now in their seventies and eighties. “In 20 years I wouldn’t be able to do this project,” he said. “The NSA is never going to release information from the field station.”

The exhibition runs from September 5th to 28th at WerkStadt, Emser Straße 124, Neukölln, 12051 Berlin. Opening Hours are Monday to Saturday 7pm to 10pm. The work has been funded by the British Council and the Arts Council of Northern Ireland.