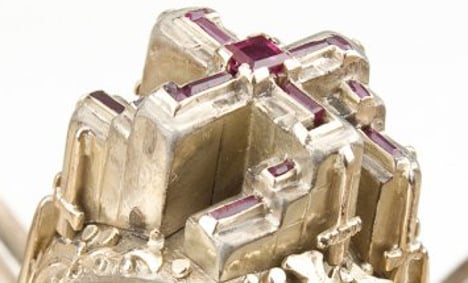 The extravagant ring was made for Hitler by German goldsmith, Karl Berthold who joined the Nazis in the 1920s.

The sides of the ring bear two swords which are flanked by wreaths of oak leaves while the swastika was formed from 16 rubies, one of which is missing.

Auctioneers Alexander Historical Auctions said the work appeared to have been made on a sheet of silver which was then secured to the body of the ring. The ring once had a coating of yellow gold which has now worn away.

It first appeared in Berthold’s photographic catalogue in 1937 and has a fancy case – a sterling silver globe on a wooden pedestal.

The auctioneers cited an article from 2011 by journalist Ron Latyner claiming the ring was taken to America after the war by a Sergeant Joseph.

He had searched Hitler’s base in Munich, the Führerbau for souvenirs and found the ring in the flooded basement of the building. The sergeant then supposedly sold it to Nevada businessman Ray Bily in the 1980s.

The report said that the sergeant’s girlfriend wore the ring on a chain around her neck for years. It ended up in the hands of collector and dealer William Blynn, who died two years ago. He had bought it from Bily. It has been consigned to the auctioneers by Blynn’s estate.

Alexander Historical Auctions will hold the auction on Tuesday in Maryland in which many items and documents from World War II are going on sale.