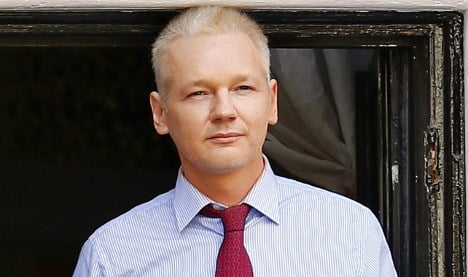 He stressed that it was not a given that action would follow, but that the prosecutor would examine the complaint and then decide whether to launch an investigation which could then lead to a prosecution.

Assange said the spying at the Chaos Computer Club’s 2009 annual congress was made public when the ex-Marine gave witness testimony in June this year in the military trial of WikiLeaks source Bradley Manning, who was later sentenced to 35 years’ jail.

The then Stuttgart-based Marine, identified in reports only as Matthew H., allegedly targeted Assange, who was speaking about the WikiLeaks platform, its German co-founder Daniel Domscheid-Berg and the French Internet activist Jeremie Zimmermann.

Assange argued that such intelligence activity was illegal in Germany, NDR public broadcaster and the Süddeutsche Zeitung newspaper reported, citing his complaint to the federal prosecutor’s office in the city of Karlsruhe.

The media reports also said Assange had offered to testify by video link from Ecuador’s embassy in London, where he has been holed up since June 2012 to avoid deportation to Sweden where he is wanted for questioning on sexual assault charges.

The Australian anti-secrecy activist denies the charges and says he fears being extradited to the United States, which wants to try him for publishing online hundreds of thousands of US diplomatic cables and secret military communications from the Iraq and Afghanistan wars.

READ MORE: German face of WikiLeaks steps down in anger