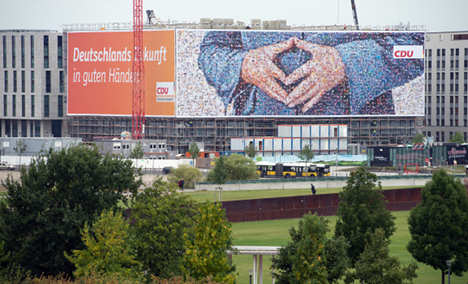 Around the size of a third of a football pitch, the 2,400-square-metre poster stretches across a half-built building near Berlin’s main train station. “Germany is in good hands,” it reads, next to a close up of Merkel’s trademark, triangle-shaped, hand gesture made from a mosaic of smaller photos.

Normally, the country’s political parties are not allowed over-sized posters. But this changes during the three months running up to an election, when parties can adorn any building except for those used by the public sector.

Opposition party the Social Democrats (SPD) voiced on Wednesday disapproval of the enthusiasm of Merkel’s CDU to embrace the rule change, Berlin newspaper the Tagesspiegel reported.

The poster reflects “a monstrous, empty personality cult,” said head of the Berlin branch of the SPD Jans Stöß. He argued that the choice of photograph demonstrated how, at the top levels of politics, the CDU’s election campaign was no longer about policy, and more about candidates.

Merkel’s signature hand gesture – which she often makes while talking in public and posing for photographs – “has no political meaning,” said Stöß.

Green politician Marc Urbatsch echoed the sentiment: “When simple symbols and memorized texts are politics, then we’ve gone to the dogs,” he told the paper.

Yet the CDU said they saw the giant hands as reflecting Merkel as “the mother of the nation, taking Germany by the hand and guiding it through crisis,” party researcher Oskar Niedermayer said.

Niedermayer added that reducing a party to simply the hands of its leader and pairing it with a basic slogan is something new. Merkel is being transformed into an icon, something that in coming years will become increasingly interesting from a cultural perspective, he said.