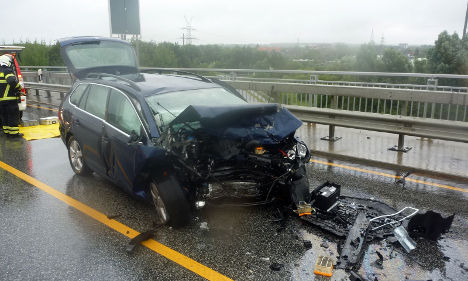 The 72-year-old woman was caught up in a fatal crash on the A23 motorway near Itzehoe in Schleswig-Holstein on Monday in which two close family members were killed.

The paramedics thought she had died and her body taken to a morgue. They said her head injuries had been severe and they had not been able to detect any signs of life, said Arno Deister, a spokesman for the Itzehoe hospital, where she was later taken.

“What exactly happened next, no one knows,” said Deister. It was only there in the morgue that – hours after having been brought in – an observant member of staff noticed she was still breathing.

The woman was eventually transferred to intensive care on Monday evening, said Deister.

“The lady suffered the most serious head and other injuries and was operated on for four hours,” Harald Stender, manager of the hospital.

The woman, who remains in a coma, had been one of seven passengers in a five-seater Audi A4 estate car, driven by her 18-year-old grandson. He lost control of the car and veered off into oncoming traffic on Monday morning – hitting another vehicle head on.

The woman’s daughter, who had been sitting in the back with her four sons aged between six and 12 years old, died at the scene, along with the youngest boy, the Bild newspaper reported.

The other five passengers – all members of the same family from the coastal town of Husum – survived with serious injuries, as did the driver of the second car, said the paper.