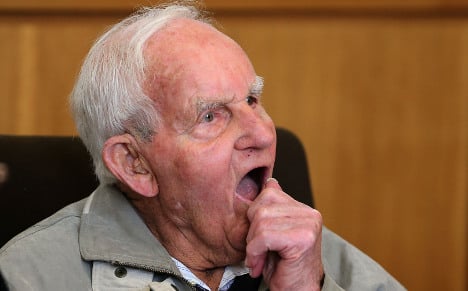 Dutch-born Siert Bruins, who is a German national, was deemed fit enough

for the trial in the western German town of Hagen.

He declined to speak but is accused, together with another former member of the SS who has since died, of the murder of Dutch resistance fighter Aldert Klaas Dijkema in September 1944.

He faces a life sentence if found guilty. Prosecutors accuse Bruins of having shot Dijkema four times in the back and the back of the head after the resistance fighter was taken prisoner in the Netherlands.

Speaking on the sidelines of the trial, senior prosecutor in the city of Dortmund Andreas Brendel argued age should not prevent wartime suspects being brought to trial.

“If I can accuse him of homicide, age plays no part,” he said. The trial was adjourned shortly after getting underway and is set to resume on Thursday.

Bruins told German television in July last year that although he was present at the shooting, it was his accomplice who pulled the trigger.

The 92-year-old, who lives in Breckerfeld in the west of Germany, was among about 30,000 Dutch citizens who collaborated with the Nazis during the occupation of the Netherlands.

conferred German nationality on all foreigners who worked for the Nazis.

Several years after the war, he was sentenced to death in his absence by the Netherlands in April 1949 for participating in three shootings, including

The sentence was subsequently commuted to a life sentence. He fled to Germany from where he escaped a Dutch extradition order in 1978 because Germany does not hand over its own nationals, but was detained and sentenced by the German authorities in a different case.

In February 1980, he was handed a seven-year prison term in Germany for

Another former SS officer, Heinrich Böre, was sentenced to life in March

2010 for the murder of three Dutch civilians.

He had lived for more than 60 years in Germany without being caught and, like Bruins, was sentenced to death by the Netherlands in 1949 but also never extradited.

soldiers have been accused of war crimes. About 13,000 have been found guilty and around half sentenced, according to the authority charged with investigating Nazi crimes.