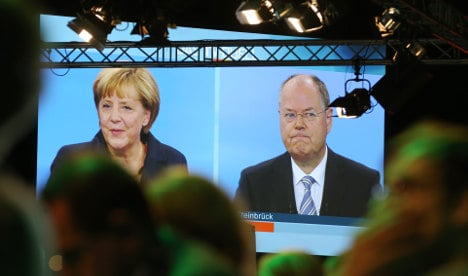 Merkel pointed at her record in steering Europe’s top economy safely through the eurozone crisis, in Sunday evening’s debate with her centre-left rival.

Social Democrat Steinbrück, meanwhile, outlined his vision of a more socially just Germany and for more solidarity within Europe, without landing rhetorical blows that looked likely to close a yawning poll gap.

Merkel, often voted Germany’s most popular politician, pointed to economic growth and low unemployment, and sought to reassure millions of voters that if she wins a third term, Germany will stay in safe hands.

“Germany is an engine of growth, an anchor for stability,” said Merkel, wearing a necklace with the national colours black, red and gold which was hotly debated in a Twitter conversation. “We have shown that we can do it in difficult times,” she said.

An initial poll by the Forsa institute for RTL television declared Merkel the debate winner with a narrow 44-43 percent lead. However, ARD public television poll said Steinbrück was more convincing, by a margin of 49-44 percent. Another poll for broadcaster ZDF declared Merkel the winner by 40 percent to 33 percent.

Bild newspaper declared the necklace and Stefan Raab – a comedian who was one of the four presenters – the winners.

The debate took the format of a lengthy interview rather than the much-hyped “duel” with the two candidates addressing the presenters and rarely confronting one another.

Much of the debate was dominated by the economy and government spending, with Merkel highlighting that her government was reducing public debt.

She said that her tough line of demanding reforms from troubled eurozone economies in return for bailout cash had shown its first signs of success.

Steinbrück’s central charge was that Merkel commonly employed a dithering wait-and-see attitude – in the energy shift from nuclear to renewable energy, or in clarifying the US online snooping scandal – and had brought national leadership to a “standstill”.

Merkel acidly told her rival – who has got in trouble for a series of gaffes but prides himself on his ‘straight-talk’ – that “I do not act first and then think. I do the reverse: I think, then I decide and then I act.”

Steinbrück said that the number of working poor had risen steeply in Germany and pushed his demand for an €8.50 minimum hourly wage as well as more help for families, from more child care places to higher pensions.

For Europe, Steinbrück, who served as Merkel’s first-term finance minister in a left-right ‘grand coalition’ cabinet, called for “a second Marshall plan” in which Germany, the continent’s main paymaster, could repay some of the solidarity it was shown after World War II.

Until the TV debate, which was broadcast on five channels, Merkel, 59, had refused to directly engage or even mention by name her challenger, many of whose party policies she has quietly adopted over the years.

Merkel has been so far ahead in the polls that at one stage she was asked whether she felt sorry for her challenger and replied that “Steinbrück really does not need my pity”.

A poll on Sunday gave Merkel’s conservatives 39 percent of the vote – a significant lead over the combined totals of 23 percent for the SPD and 11 percent for the centre-left party’s preferred allies the Greens.

On foreign affairs which was one of the last topics of the 90-minute debate, both candidates agreed that Germany would play no part in any military attack against Syria in response to the regime’s alleged poison gas attacks. They stressed the role of the international community in legitimizing any action.

And on the US NSA spying scandal, Steinbrück reiterated his charge that Merkel had failed to protect the German people’s civil rights, and praised fugitive

Despite what was at stake in the debate, both candidates avoided ugly personal attacks and steered clear of blunders.

“Merkel and her challenger have survived the TV debate as expected, and neither embarrassed themselves,” commented newspaper the Süddeutsche Zeitung. “Victory and defeat in such cases are a matter of interpretation – unless one follows the thesis that for Steinbrück, considering the poll figures, anything but a universally perceived victory must be judged a defeat.”

READ MORE: ‘Why this is Germany’s most boring election’