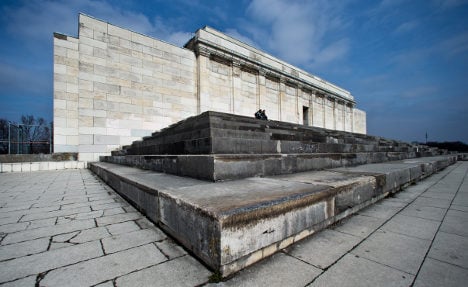 The enormous rally grounds, which once covered 11 square kilometres and hosted the Nazi Party rallies documented in Leni Riefenstahl’s propaganda film Triumph of the Will, have been a headache for the city since the war ended.

Some parts of the huge complex have been used for other purposes, and there is now a new museum in one chunk of a building, but many bits are starting to fall apart, presenting dangers to the hundreds of thousands of people who go to see it each year.

In a report on Friday, the Süddeutsche Zeitung suggested that Nuremberg had to chose between three possible approaches to the complex – a product of Hitler’s megalomania designed in part by his architect Albert Speer and never completed.

The first option would be to destroy it. But, the paper says, although some parts were blown up to make room for housing in the 1960s, much of the rest is legally protected.

In any case, Maly told the paper demolishing the remaining buildings would provoke international outrage.

The second option would be to completely abandon the buildings to the weather and the process of natural degradation. Many in the city have suggested this would be a powerful symbol of how an era was left behind, morally as well as a physically, the paper said. The crumbling remains of the mad constructions of an empire which was supposed to last a thousand years would be a stark message against such hubris.

Yet allowing the buildings to collapse would force the city to fence them in – to protect visitors from falling rubble. Much of the area would have to disappear from public access, and, suggested Maly, could become a scene of mystery again. Some parts are already fenced off.

So the city has decided to renovate the buildings to a certain degree – although Maly said he did not like the word, as it sounded too much like restore. “We will not be looking for original-style sandstone,” he said. The process would be one of maintenance and a slow transformation into a place of historical learning, he said.

The first tranche of €3 million has already been earmarked to examine part of the famous Zeppelin tribune, and one of the 24 towers along the ramparts. There is also the Golden Hall underneath the stone steps, where the mosaic ceiling needs attention, while the questions remain about how to deal with post-war additions such as graffiti left by Allied soldiers.

Petra Waldmann, technical head of the Nuremberg construction office, told the Süddeutsche Zeitung that a survey would be conducted during the autumn and that by January it would be known how much the necessary work on the entire complex would cost.

Until now the rough estimate has always been €70 million, but a concrete sum would enable Nuremberg to approach national authorities for financial help. “This must be a national job, we cannot possibly take it all on alone,” said Maly.

Around 200,000 visitors took part in official tours of the rally grounds last year, with probably hundreds of thousands more having a walk around on their own, the Süddeutsche Zeitung said.