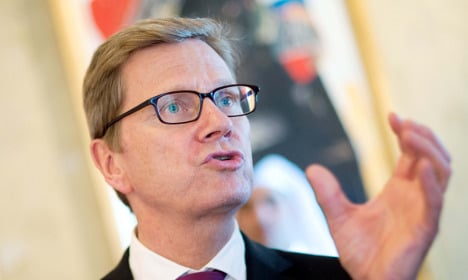 “We have not considered it and we are not considering a military strike,” government spokesman Steffen Seibert told reporters, adding that in any case, Berlin has not been asked to take part in any such military action.

response despite British lawmakers’ rejection of any involvement in military

In pre-released extracts on Friday, Foreign Minister Guido Westerwelle told Saturday’s Neue Osnabrücker Zeitung that such a move had “neither been asked nor is it being considered by us”.

“We are pushing for the United Nations Security Council to find a common position and for the work of UN inspectors to be finished as quickly as possible,” he added.

Berlin had previously said it would support “consequences” against President Bashar al-Assad’s regime if its suspected deadly use of chemical weapons was confirmed, but had not specified what such consequences would be.

On Thursday, Chancellor Angela Merkel and Russian President Vladimir Putin agreed on the need for the UN Security Council to study a report by UN experts on the alleged chemical attack outside Damascus, the Kremlin said. Hundreds of people died in the attack.

This came after US President Barack Obama spoke with Merkel on the phone, and plans for multilateral military action against Damascus were been dealt a blow by the British Parliament.

British MPs voted against military action on Thursday night, facing down Prime Minister David Cameron, and forcing Obama to decide whether to go in alone, find new allies or scrap plans for an attack.