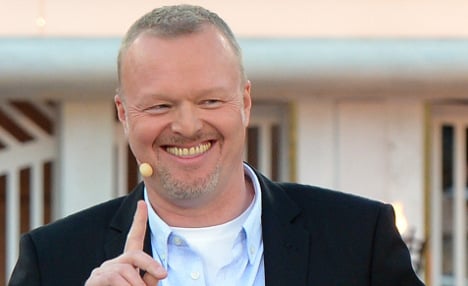 Born in 1966 in Cologne, Raab was set to follow his parents into their butchery firm, but went into the advertising jingle business instead. He ended up producing and then presenting shows for the music television channel Viva.

By 1999 he had got his own show, TV total, with a mix of his jokes, a selection of guests and clips from often daytime television shows where people embarrassed themselves.

The show became hugely successful. His brand of irreverent and some would argue, predatory, humour attracted large audiences.

One song based on a sample of a woman failing to pronounce Maschendrahtzaun – German for chain link fence – while on a daytime television show, became a huge hit. She and the neighbour with whom she was arguing became momentary stars – albeit with much of the country laughing at their provincial accents and small-town manners.

Raab also produced and starred in a number of spin-off shows including Schlag den Raab where contestants were invited to take him on in a number of disciplines from boxing to racing down a luge run in a wok.

This in turn led to the TV total Wok-WM televised competition in his invented sport, as well as the TV total Turmspringen occasional shows where celebrities competed in high board diving.

He has won a slew of television prizes, as well as the 2010 Eurovision Song Contest – albeit this last one not himself, despite entering to represent Germany. He produced a televised show to find the German contestant, won by Lena Meyer-Landrut, who went on to win the competition, with Raab never far away.

Last year he launched a political talk show called Absolute Majority, and although it regularly attracts criticism for producing more heat than light during the debates. This led to him being nominated by his professional home ProSieben as its representative during the chancellor debate.

He will be under at least as much scrutiny as the candidates, as he was a controversial choice to sit alongside political talk show heavyweights Anne Will, Maybrit Illner and Peter Kloeppel. Each of the four major television channels was invited to send one questioner.