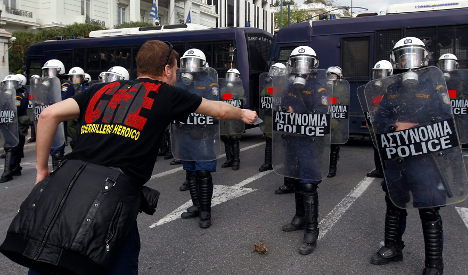 She heaped blame for Europe’s debt and recession troubles on her centre-left opponents, saying that while in government the Social Democratic Party (SPD) had contributed to creating the causes of the crisis.

“The crisis emerged over many years, through founding errors in the euro — for example, Greece should not have been admitted into the euro area,” Merkel said to scattered applause at a campaign event Tuesday in the northern town of Rendsburg, footage from news channel ntv showed.

The conservative leader reiterated that her predecessor, SPD chancellor Gerhard Schröder, had in 2001 consented to Greece’s entry and to weakening the currency bloc’s stability pact, decisions she labelled “fundamentally wrong”.

Last Saturday, on her whirlwind campaign tour, she had also attacked the Social Democrats, saying: “We don’t need to be told by the people who admitted Greece into the euro-area that today we have problems with Greece.”

The eurozone crisis and the bill German taxpayers may have to foot for it have become divisive issues in an otherwise lacklustre campaign ahead of the September 22 vote, in which Merkel remains the favourite to lead the next government.

Merkel is still Germany’s most popular politician, with a yawning personal approval lead over her SPD rival Peer Steinbrück, in part because she is widely perceived to have steered Europe’s biggest economy safely through the eurozone crisis.

While Greece, Spain and other southern countries remain mired in recession with huge unemployment, Germany’s export-fuelled economy is projected by the IMF to grow 0.3 percent this year and has a jobless rate of only 6.8 percent.

Finance Minister Wolfgang Schäuble kicked loose the renewed eurozone debate last week when he admitted Greece will need a third international bailout package from next year, after earlier suggesting this was only a possibility.

The SPD immediately seized on the frank comment by the veteran minister, accusing the Merkel government of having sought to mislead voters until after the election about the true costs the German state may face from another bailout.

Challenger Steinbrück — Merkel’s first-term finance minister in a former left-right ‘grand coalition’ government — has warned he would seek to pin down her position during their only televised debate Sunday.

He has accused the coalition government of Merkel’s conservatives and their junior partners the pro-business Free Democrats of having “distributed sleeping pills and trying to hide the fact that stabilising the eurozone will have a cost”.

Steinbrück has advocated greater help and solidarity for southern Europe — recalling how post-war Germany was aided by its neighbours — and proposed a modern version of a “Marshall plan”, part-financed by a financial transaction tax.

Ex-chancellor Schröder, who lost to Merkel in 2005 elections, accused her government of lying about Greece’s problems, speaking at a campaign event last week in which he was backing Steinbrück.

Greece, since the beginning of the debt crisis in 2010, has struck two bailout deals with the EU and the International Monetary Fund, worth a total of €240 billion euros that allowed the indebted country to remain in the eurozone.

Having paid the price with six years of recession and draconian austerity, Greece now still faces a €10-billion financing gap for 2014 and 2015.

Merkel has insisted Germany can only succeed within a strong and globally competitive Europe and has maintained a tough love approach of linking “solidarity with responsibility”, providing financial relief in return for painful spending cuts.

READ MORE: Why we must give Greece more help