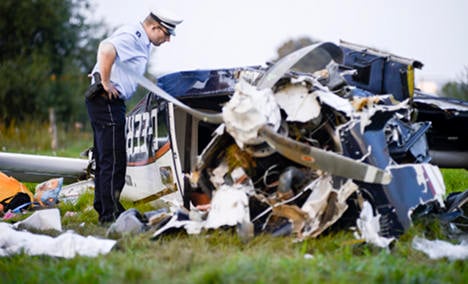 The group, consisting of two families, were flying back from a trip to the North Sea coast when the Piper 32 plane crashed into a field in the Fröndenberg area of North Rhine-Westphalia at around 5pm, not far from its destination near Dortmund.

Two women, two men, and a child died in the crash, the fire brigade confirmed late on Tuesday night. No identities or ages have been released, and police are in the process of informing the victims’ relatives.

All of the dead were sat towards the front of the plane, regional newspaper the Westdeutsche Allgemeine Zeitung (WAZ) reported on Wednesday.

“The head and neck injuries were so severe that they died from them,” the head of the medical team at the crash site, Reinhard Arnsberg, told the newspaper.

Three children sat at the back on the place survived but were seriously injured and were taken to a nearby hospital by air ambulance.

When the emergency services arrived, two children were already out of the plane and one had to be cut out by firemen. It is unclear whether the first two climbed out themselves or were helped by passers-by who had rushed to the scene.

Investigators do not yet know what caused the accident but, the WAZ reported, onlookers saw the vehicle flying very low before it crashed. The pilot was thought to have been experienced at flying light aircraft. It clipped a tree on its way down to the field.

At least 78 people were at the scene clearing the wreckage and attending to the surviving children. The front of the vehicle was totally destroyed, and baggage was all over the field.