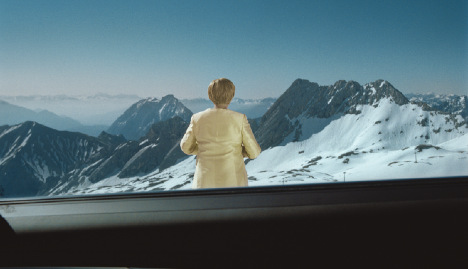 Named Eine Deutschlandreise, meaning a German Journey, the photos show a model posing as the chancellor in a government limousine looking out onto some of the country’s most famous geographical landmarks.

In one, the model is clutching the cup of a flask while staring from her car across the German Alps. In another she stands on top of Zugspitze almost in the style of one of Germany’s most famous paintings – The Wanderer by 19th Century artist Caspar David Friedrich.

Editor of Monopol Holger Liebs said: “It is fascinating how the photos almost look like romantic paintings.”

CLICK HERE to see a gallery of the photos

The photos have been released by Mühe and the magazine with less than a month to go until Germany’s elections.

Mühe’s pictures capture the loneliness of power. He said: “I’m interested in power as a subject – how it is expressed, exercised and managed.”

The Berlin photographer spent almost a year travelling around Germany for the exhibition.

The photos are on display in Berlin from Wednesday August 28th to Saturday August 31st at the former Jewish Girls School on Auguststraße. Monopol is on sale in shops from Thursday.