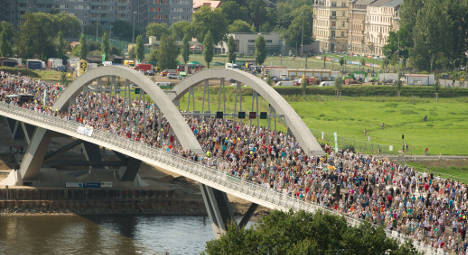 The Waldschlößchenbrücke, which at 635 metres is the longest bridge spanning the River Elbe, was built to alleviate traffic in the eastern German city’s historic centre.

But added to its €180 million price tag was the blow to the city’s prestige when cultural watchdog Unesco decided to drop the Dresden Elbe Valley from the World Heritage list in 2009 when the project to build the four-lane, bridge, made from steel and concrete, got the green light.

The “cultural landscape” that was designated a World Heritage site just five years earlier extends for some 20 kilometres (12 miles) on either side of Dresden.

On Saturday Dresden held an opening party for the bridge with thousands of people walking across it. The first vehicles made the trip on Monday.

UNESCO argued that the new bridge would blight the view of Dresden’s old town and was a blot on the landscape. The city is home to tourist magnets such as the Semper Opera House and the Dresdner Frauenkirche, an 18th-century Lutheran church. Both were destroyed in World War II and later rebuilt.

one-of-a-kind landscape” and the loss of the Unesco World Heritage title.

Holger Zastrow, head of the Saxony region’s Free Democrats, urged the World Heritage Committee to come and see for itself “that the Elbe Valley is not disturbed and more than ever not destroyed”.

The project also raised concerns over its environmental impact, notably on an endangered species of bat that lives in the area, leading to a vote on the issue by Dresden residents as well as court action.

The bat’s supporters won a small victory – a 2007 court decision stipulating a 30-kilometre per hour speed limit on the bridge at certain times.

beginning on February 13, 1945, sparking a firestorm that destroyed much of the historical centre of the city, much of which has been restored.

struck from the prestigious list, after Oman’s Arabian Oryx Sanctuary was dropped in 2007 after a sharp decline in the oryx population as a result of poaching and loss of habitat.