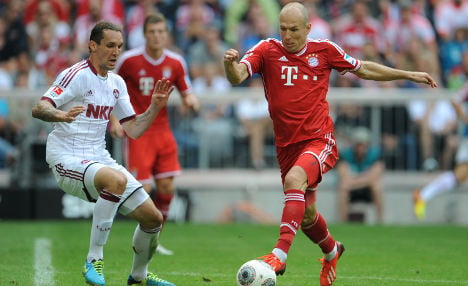 “We allowed them only a few chances, which I liked, and we played better in the second-half,” said Guardiola as Bayern set a new club record of 28 league games without defeat.

“We attacked fast through Ribery and Robben and I am happy with how we controlled the game.”

“Nuremberg were very compact and organised, it’s always hard to play against a team like that.”

The win in front of 71,000 fans at Munich’s sold-out Allianz Arena marks the start of a busy seven-day period for Bayern who are away to Freiburg in the league on Tuesday, then travel to Prague for Friday’s showdown with Chelsea in the UEFA Super Cup.

Guardiola started with a star-studded midfield featuring wingers Robben and Ribery either side of Spain’s Thiago Alcantara and Germany playmaker Mario Goetze, who made his competitive debut for Bayern after joining from Borussia Dortmund.

The hosts rode their luck in the first half as only the crossbar denied Nuremberg when striker Daniel Ginczek’s shot clattered off the underside of the bar with Bayern goalkeeper Manuel Neuer beaten on 15 minutes.

Bayern were awarded a penalty on 33 minutes by referee Christian Dingert when Robben was brought down by Sweden defender Per Nilsson, although the replay showed the Dutchman used his hand to keep the ball from going out.

With time running out, Ribery headed home before a fine solo effort from Robben, cutting in from the right, on 78 minutes ensured that Bayern would maintain their 100 percent league record this season.

Schalke, who need to win at Greece’s PAOK on Tuesday to progress to the Champions League group stage after drawing 1-1 in Wednesday’s play-off first

leg, suffered another confidence-sapping defeat as they lost 2-1 at Hanover 96

and finished with nine men.

The visitors had defender Benedikt Hoewedes sent off on 14 minutes for bringing down Hanover striker Mame Diouf with only the goalkeeper to beat and Hungary midfielder Szabolcs Huszti drilled home the penalty.

Diouf then headed home three minutes from the break to leave Schalke reeling before striker Adam Szalai pulled one back for Schalke in the second-half.

There was a flurry of cards in the last 15 minutes as Hanover’s Huszti was sent off for fouling Schalke’s Tim Hoogland, then Schalke left-back Christian Fuchs was dismissed five minutes from time for a second yellow card.

Having also been hammered 4-0 at Wolfsburg last Saturday, Schalke have just one point from their first three games and lie 14th in the table.

Another defeat at PAOK will leave coach Jens Keller in a precarious position.

“Obviously, we haven’t got much to shout about at the moment, but we played well in the second half despite the numerical disadvantage,” said Keller.

“It’s not a pleasant situation to be in, but we have to win in Greece on Wednesday.”

Mainz are the fourth team to maintain a 100 percent record after they enjoyed a 2-0 win at home to Wolfsburg, who had new signing Luiz Gustavo sent off for a second yellow card on just his second appearance since signing from Bayern.

Hoffenheim were held to a 3-3 draw at home by Freiburg in an action-packed game which saw each side finish with 10 men and Freiburg coach Christian Streich banished to the stands.

After they were humiliated 6-1 at home by Hoffenheim last week, Hamburg slumped to another defeat, losing 1-0 at Hertha Berlin with Colombia’s Adrian Ramos scoring the second-half winner.