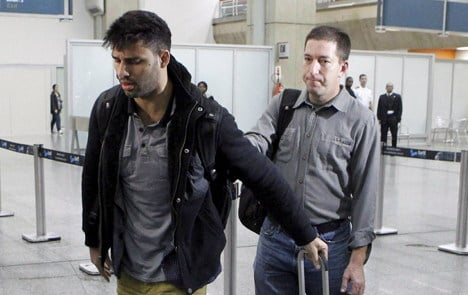 Markus Löning, the human rights chief at Germany’s foreign ministry, said on Wednesday the British government had crossed “the red line” and had their actions had left him “truly appalled”.

He expressed “great concern” about media freedom in Britain after the Guardian said it was forced to destroy files linked to US surveillance practices or face a court battle.

Löning also slammed the detention and questioning at a London airport on Sunday of the partner of US journalist Glenn Greenwald who has written extensively about Snowden’s revelations for the Guardian.

“The United Kingdom has a long and proud tradition of freedom but the way the authorities detained David Miranda at Heathrow airport I see as unacceptable,” he told newspaper the Berliner Zeitung.

“That took place on the basis of an anti-terror law but I cannot see any connection to terrorism. And the actions of the security services against the Guardian as described by editor-in-chief Alan Rusbridger deeply shocked me.” He added: “The red line was crossed there.”

David Miranda has been working with Greenwald and the Guardian on publishing material leaked by Snowden, the former US National Security Agency (NSA) worker who has turned leaker.

Löning welcomed a “broad debate” in Britain about the authorities’ actions and said his comments were intended as a “reminder of shared values among friends.”

The detention of Miranda and treatment of the Guardian by the British government has also been met with horror by the German press with newspapers running editorials expressing their dismay at the action.

And Sigmar Gabriel, chairman of Germany’s biggest opposition party, the SPD, said that the European Union could intervene. He told newspaper Kölner Stadt Anzeiger that Britain should think about the consequences of its action.

He said that the behaviour of the security services was “not worthy of such a proud democracy.”

Gabriel added: “Eroding freedom and fundamental rights under the guise of fighting terrorism can’t be allowed to happen in Europe.”

Asked about Löning’s remarks, a spokesman for German Chancellor Angela Merkel said he would not comment on the Guardian case.